It Wasn't the Worst Experience of My Life 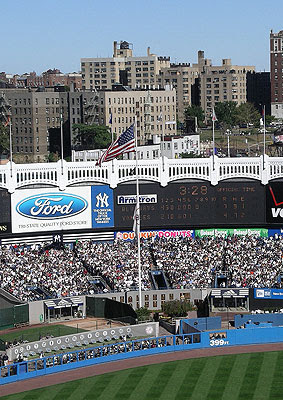 Last night I did something I thought I would never do in my lifetime: I sat in the bleachers at Yankee Stadium.

I've been to about 40 games there in my life, and I have been all over the park. I even sat right behind home plate back in the 1980s when Tower Records had two box seats one season. But I had never been out there with those individuals known as the "Bleacher Creatures." As you may know, their reputation has always preceded them for their chimp-like behavior.

But my friends Peg and Ken were in town on vacation and they had tickets for the first two Padres-Yankees games. The second was through a friend of theirs who had leftfield bleacher seats. So I decided to take a chance and go out there.

Like last Saturday, the night started with a rain delay. But thankfully, the rain passed and the game began after a 75-minute delay. We were sitting in the second section from the end in left field, and it was mostly filled. (There were some bench seats that were unoccupied.)

The game wasn't much, as Jake Peavy didn't pitch well and the Yankees got four runs off him in three innings. But once the fourth inning began, all of a sudden people began departing. In masses. It wasn't terribly late (about 9:40 PM), but for the next inning or so, one section of the bleachers almost seemed to empty out. We wondered if security ordered people to vacate it, but that wasn't the case.

I have to admit that the fans weren't terribly obnoxious (although every time Jorge Posada came up they did that "Hip Hip Jorge" chant, which was really annoying after the first time), and that might have been because it was a Padres game, and there's no rivalry there. (I can only imagine what it's like out there for Red Sox games. And I have no interest in discovering what that's like.) I couldn't help but laugh every time Johnny Damon came up, when some fans behind me chanted "Johnny Damon." All I could think of was Judas' grand slam in the same park on October 20, 2004 that put the choker tag on their beloved team.

The view of the park from our seats was actually pretty good, although the pitcher and batter feel like they are in another zip code.

The Yankees ended up winning, 8-5. The Padres made an effort to get back in the game with three home runs, but they fell short. Kyle "The Mop" Farnsworth gave up a leadoff homer to Chase Headley and the folks behind us got awfully nervous (and for good reason). But that's as close as the Padres would get.

I have to admit I saw very little anti-Red Sox paraphernalia. (Although I saw a young girl wearing the newest anti-Red Sox shirt they've come up with: "There was never a curse. Boston just sucked all those years." My, how clever these fans are.) I actually saw about 5 different people wearing Red Sox hats, and a smattering of Padres hats and shirts. I even saw a few brave souls in the bleachers wearing Mets shirts. (That's courage, especially after this week's events.) I also saw a Yankee fan wearing a Yankee shirt that said on the back: "COSTANZA 0". That gave me a good laugh.

And coming home on the subway, I actually saw a fan wearing a "Yankees Universe" t-shirt. It was the very first fan I've ever seen wearing that shirt. I thought Yankee fans had the good sense to avoid that cheap ripoff of "Red Sox Nation." Well, at least most have.

It was my first game at Yankee Stadium in three years (that was the third game of the season in 2005 when Mariano Rivera melted down in the ninth against the Red Sox, was taken out and booed off the mound), and my first in the infamous bleachers. It was great being with my dear friends, even if their club didn't win.

I've had worse experiences in my life, but it will be my one and only time there. When the Red Sox march into town in two weeks, I'll be at the safe haven known as Professor Thom's, thank you.
Posted by The Omnipotent Q at 12:07 PM

The Bleacher Creatures actually sit anywhere from Section 38 to 43, but their "HQ" is Section 39 in RCF, and have T-Shirts with the Yankees Logo and Section # on their shirts:

They're lucky if they can spell the word "Suck" without "Hooked On Phonics".

I've never been to either Shea or The Stadium, and they're both going away. I'm going to try to get down there for a game at both before the year is out. I'll stop by Thom's, of course, if I do make it.

Hey John, thanks for braving the bleacher seats with us. Thought you might enjoy this shirt, or even order it: http://www.bustedtees.com/jesushatestheyankees#male