Wearin' of the Green Brings No Luck 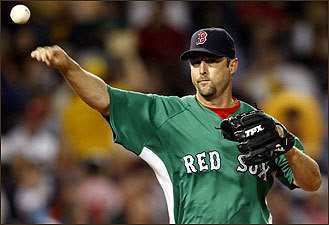 The Red Sox honored the NBA champion Celtics before last night's game at Fenway Park. As the game was being held up by rain, the Celtics came out on to the field from the centerfield garage door in the duck boats to thunderous applause. And the victorious players gathered on the mound before the game with the championship trophies (why did they have four of them?) and Paul Pierce threw out the first pitch to Jason Varitek.

The Sox wore the green jerseys in honor of the Celtics. They also did so last season to remember the late Red Auerbach before an April game with the Yankees (remember that stunning eighth inning comeback?). But the green jerseys didn't bring much luck this time as the Red Sox lost to St. Louis, 5-4.

Tim Wakefield looked solid for the first four innings, but then allowed home runs to Jason LaRue and Skip Schumaker. He also wasn't helped by the defense, specifically Julio Lugo. The weak link in the Red Sox' infield defense made two errors in the sixth inning that cost the Red Sox a run. He now has a mind-numbing 16 errors to lead the majors. Lugo also hit his first home run of the year in the bottom of the inning to tie the score.

But Lugo wasn't the only one responsible for the loss. Manny Ramirez came up twice with the bases loaded and struck out looking in the third and then bounced into a DP in the seventh that scored one run but torched what could have been a big inning. Hideki Okajima continued to struggle as he allowed a home run to Yadier Molina in the eighth that proved to be the difference in the game. The Red Sox rallied for one in the ninth, and had first and third with two out, but Kevin Youkilis flied out to end it.

The loss dropped Wakefield to 4-5, and Daisuke Matsuzaka comes off the DL today to face the Cardinals this afternoon at Fenway.
Posted by The Omnipotent Q at 12:01 PM