Don't Order the Plaque Just Yet 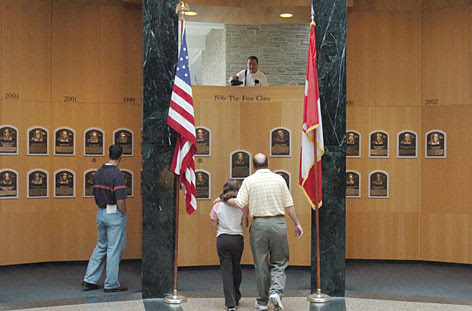 No, Joba Chamberlain has not yet earned the right to have a plaque in this Hallowed Hall just yet.

However, if you read the New York papers, you would believe he already has. (Somehow, his 5 2/3 inning no-decision against the Padres merited a front-page picture in the New York Daily News. That's how nauseating it's getting.)

My friend Adam sent me an interesting email about Chamberlain earlier this week, and I thought it merited sharing with you, my loyal readers.

Congratulations, Joba Chamberlain went 6 innings the other night and only gave up 1 earned run(against Houston). According to the NY Post's George King, "When the Yankees' brass decided to take the best set-up man in baseball and turn him into a learn-on-the-job starter, they fantasized about games like last night's." Why? He allowed 10 base-runners in 6 innings and only struck out 2. The end result was good for the MFY, but a 1.67 WHIP is pretty ugly. If Joba pitches like he did last night to a team that has seen him before (or a solid AL team with a decent DH), he'll get lit up.

As Buster Olney notes "an evaluator with a rival team who has seen Chamberlain recently thinks he would make more impact as a set-up man, or eventually, as a closer. I asked the evaluator for an e-mail assessment, and this was his response: 'He has a good arm, but it is straight and the hitter picks up the ball. Slider is decent, but doesn't control it well enough, yet. I think he would be a lot more valuable as set-up or eventually a closer. If he is throwing 180 innings a year, his velocity will come down much more quickly.'"

George King believes the MFY brass see Chamberlain as a potential Josh Beckett-type ace. "Three starts in the middle of a season don't mean Chamberlain is ready to be Beckett. He still has to work on holding runners, and only with more experience will he know what's working that night and what isn't." I think Joba need to work on more than just holding runners on before he can be compared to Beckett.

Also, anyone who thinks Chamberlain will have a huge impact this year is crazy. He has thrown 36.1 innings so far this year. His innings cap is around 140-150. The MFY have played 68 games. That means Joba will make about 19 starts if he takes a regular turn. The MFY would have to hold him at 5 innings a game to keep him under his cap. Assuming they did that, Joba would finish the season with 131 IP--ready for one post-season start before the annual MFY October first-round exit (if they make the playoffs).