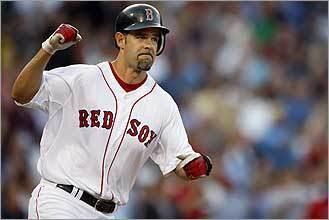 Mike Lowell hit his second grand slam of the season on Thursday night, his 10th ding dong of the year, in the fourth inning to lead the Red Sox to a 9-2 win over the Baltimore Orioles and give them the series win after taking the second game on Wednesday, 6-3. (Remember when Mike entered May with no homers and no RBI? Seems like an eternity ago.)

Lowell hit his second homer in as many nights, and J. D. Drew continued his torrid hitting, with his 5th home run in this homestand that just concluded to ice the game in the eighth inning.

Jon Lester looked sharp, and pitched seven innings to get his 5th win of the season. He allowed just two earned runs. Jason Varitek missed the game due to a strep throat. Kevin Cash filled in for him. Kevin Youkilis also hit a home run, and appears to becoming out of his slump.

Sorry to see old friend Kevin Millar leave the game in the second inning after hitting a ball off his knee. He was in considerable pain as he departed. X-rays were negative, and he is listed as day-to-day.

Get well soon, KFC.
Posted by The Omnipotent Q at 9:31 PM