An Agonizing Way to Avoid a Sweep 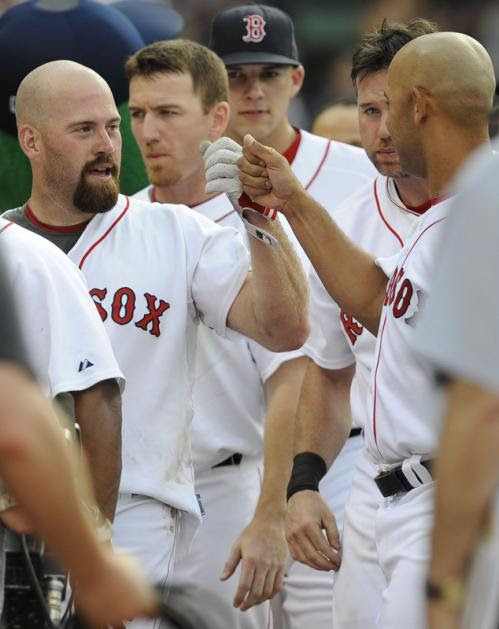 Yesterday's Red Sox game may have been the most frustrating and agonizing game they played this season. And it's a game they actually won.

The offense was silent for 6 2/3 innings against Cardinals pitcher and former Red Sox stiff Joel Pineiro. They looked sluggish and lethargic, with many of the main players mired in slumps (like Ellsbury, Varitek, Lowell and Youkilis). It looked like they might get shutout until Kevin Youkilis broke up the shutout with a solo homer. Then in the eighth the Red Sox got a break when Rick Ankiel slipped and fell and Coco Crisp got a triple and scored on a sacrifice fly to tie the game. They got another on a bases loaded walk to grab the lead, 3-2.

But Jonathan Papelbon couldn't seal the deal, as with two outs he walked Chris Duncan and gave up an RBI double to Adam Kennedy to send the game to extra innings.

And here's where the real fun began.

In the tenth inning, the Sox got a leadoff double from Jacoby Ellsbury, but left him on third. Frustrating, and I wanted to punch the wall.

In the eleventh, they got a leadoff double from Mike Lowell. Again they didn't score, after having the bases loaded and one out, and it included one of the worst at-bats of the season, from Alex Cora. He actually swung and missed at a ball that hit his left knee for strike three. I wanted to put my fist through the wall at that point.

In the 12th inning, Dustin Pedroia led off with a double. Again no runners scored. I wanted to put my fist through the television set by then.

St. Louis was equally adept at leaving runners everywhere, including the bases loaded in the 11th. In the 13th inning, Duncan was gunned down at the plate by J.D. Drew. In the bottom of the inning, they were running out of pitchers, and brought in a rookie named Mike Parisi, who's record indicated the game would soon be over. After a Lowell single, Youkilis ended the agony by slamming a pitch into the Monster seats for a 5-3 Red Sox win. Hallelujah.

I've always said the Red Sox have taken about five years off my life. I think yesterday's agonizing win, which narrowly avoided a sweep, may have doubled that.
Posted by The Omnipotent Q at 10:52 AM