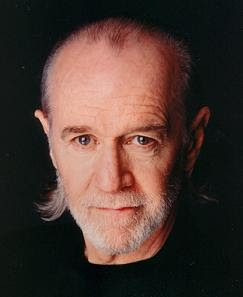 I was shocked and terribly saddened to pick up the newspaper this morning and learn of the death late last night of one of the greatest standup comedians of all-time, George Carlin. He died in Los Angeles of heart failure, after years of heart-related problems, at the age of 71.

Mr. Carlin was born in New York, and brought that smart alecky-street wise persona to his act. I was a big fan of his HBO specials, and I'm glad that the HBO Comedy Channel runs them frequently. He began his career as a "regular" standup guy, doing shows like "The Ed Sullivan Show" with his famous "Hippy Dippy Weatherman" routine.

But by the early '70s, Mr. Carlin had changed his act considerably, growing a beard and doing sketches about harder edged things like war and racism. He gained a whole new following, and in 1972 was arrested for doing his "Seven Dirty Words" routine in Milwaukee.

Mr. Carlin was also the first host of "Saturday Night Live" on October 11, 1975. He actually retired from standup for nearly five years, but his HBO specials put a new jumpstart to his career. He also appeared on TV and in movies, such as "Bill and Ted's Excellent Adventure," "Dogma," "Thomas the Tank Engine" and "The George Carlin Show."

He went into rehab in 2003, but he was limited by heart problems in recent years. I want to close my post about the great George Carlin with a YouTube clip that I put on the blog many months ago. In tribute to him, I will always think of this routine when I think of George Carlin. Of course, it's "Baseball vs. Football."

I know he wasn't a believer in God, but I'm sure George Carlin has been rewarded by The Almighty.

And thank you for rewarding all of us with all the laughs and memories, Mr. Carlin. I'll always treasure them.
Posted by The Omnipotent Q at 11:15 AM

Great hero of my youth. And "Baseball vs. Football" is stunning, of course.

I wasn't a great fan of his later stuff, as he basically ragged on my religious beliefs every other routine. However, I like to think that he is now finding out about the errors of his ways and is not too disappointed that he was wrong.

I kind of felt the same way about his later stuff too, Suldog. He seemed to really go after organized religion with a vengeance in his last specials, including his very last one which turned me off a bit. But it certainly doesn't take away from his overall body of work, which was outstanding.

And I love the way he lampooned the PC crowd years ago with his routine about how the Earth will outlive humans.

George will live forever with his HBO specials and YouTube videos.

And I'm sure The Almighty has a sense of humor, and is probably splitting a beer with him now as I write this...

I've heard those kinds of stories about him before, s1c, about what a kind man he was away from the cameras and crowds. Thanks for confirming that. George will be missed.

George Carlin made you think as well as laugh. I'd like to believe that George and Bill Hicks are having some drinks right now.