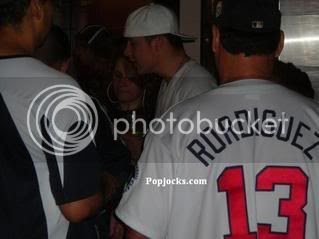 Early today I discovered a web site called Popjocks.com, and they had an interesting story there. Apparently, a fan was spotted wearing an Alex Rodriguez World Baseball Classic jersey in Yankee Stadium this past weekend. Not so unusual, as there are a lot of them out there from players from all different countries.

But this one had a typo on the back, that if I had gotten it, I would have sent it back immediately and demanded a new one. (Not that I would have ever gotten an Alex Rodriguez jersey, no matter what team he plays on.) Instead of spelling the last name "RODRIGUEZ," it was spelled "RORDIGUEZ." The picture you see makes me wonder if the guy knows about the mistake, or whether he even cares about it.

This was seen in the same place where a banner was hung many years ago from the upper deck saluting the Yankees captain, "Derek Jetter."

I guess spelling is not the strong suit of many Yankee fans. (My thanks to Popjocks.com for the picture and interesting story.)
Posted by The Omnipotent Q at 5:07 PM

Is that really Yankee Stadium? Doesn't it look like someone's got a wine-type glass right in the middle there?

could be...they have fancy restaurants/grills in there. more than likely a clear plastic cup.

thanks for the hype!

#1 - Nobody in our modern world can spell, and nobody seems to care. There's no sense of artistry or individual pride in one's workmanship. The signage industry disappoints me again and again and again. And again.

#2 - To give this goon the benefit of the doubt, maybe it's a reference to Coach Z from homestarrrunner.com? See this link:

I guess they have wine drinkers in Yankee Stadium, who knew??

My pleasure to spread the word, popjocks. Thanks for the cool photo and story...

As someone who won a few spelling bees in school, it also sad to see so many misspellings everywhere. But it's generally not a priority in most people's lives...

There are 2 Such Locations in "The Toilet":

It says on the popjocks site that they were "in the concourse." So if that is a goblet, it's not the concourse. Good call that it could be a plastic beer cup, but I see a glass with a lemon in it wit a straw sticking out.