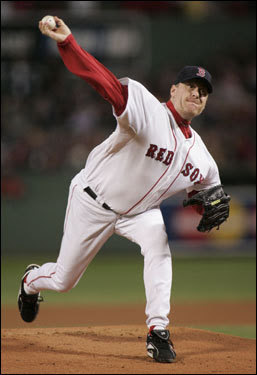 I was with a huge throng at Professor Thom's last night for both the Red Sox Sunday night game and the Patriots game with the Chargers. The TVs in the bar were equally divided between both contests. But my mind was squarely on the Red Sox.

In the afternoon I watched the Vikings-Lions game among the host games featured in the bar. From watching the game, it's pretty clear that neither team is among the NFL's elite, or a playoff-caliber team. The Vikings made all kinds of mistakes, as Tarvaris Jackson threw four interceptions, and they also lost a critical fumble in OT. Combined the Vikings and Lions turned the ball over four times.

It was 17-10 when the Vikings' Ray Edwards recovered a fumble and returned it for a TD to tie the game. Detroit went for the win in the final minute with a long field goal, but it was wide left. Jackson's best moments in the game was when he drove the Vikes to the Detroit 35 with just seconds to play, but Ryan Longwell's 52-yard field goal hit the upright and carromed away. It went to OT, and Jackson was knocked out of the game. Brooks Bollinger came in and promptly fumbled at midfield. Detroit took over and got down to the Vikings 20, and Jason Hanson kicked the winning field goal to give the Lions a 20-17 win.

As the Patriots were cruising over the Chargers to an easy win, 38-14, the Red Sox had their hands full with the Evil Empire. It was an exciting game all around, the best played of the weekend. Curt Schilling pitched a terrific game for seven innings, as the rest he got from that midseason injury has done him good. He was economical in his pitches, but ran into trouble in the eighth, and gave up a three-run home run to Derek Jeter to put the Sox behind.

The Legendary, Immortal Joba Chamberlain sure did look rather hittable last night, surrendering a double to Eric Hinske and a long home run to Mike Lowell. And Mariano Rivera pitched a shaky ninth, allowing a run and eventually got David Ortiz to pop up with the bases loaded to allow the Yankees to escape with a 4-3 win.

Not the best of days yesterday, but the Sox got what they needed this weekend. One win, and three good performances from their starting pitchers. Their lead is now 4 1/2 games with 12 to play. The magic number remains at 9, and now it's off to Toronto and Tampa Bay for the final road trip of the regular season.
Posted by The Omnipotent Q at 12:11 PM