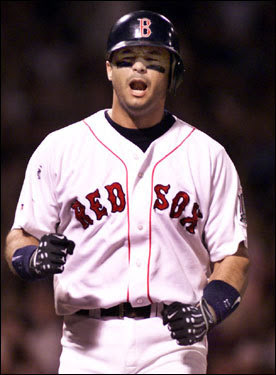 It was a wild night at Fenway Park last night, and it certainly didn't get off to a good start. Tim Wakefield got banged around pretty good, and got lit up for his second straight start since he missed one with a sore back. He gave up seven runs in just over 3+ innings.

This was a game the Sox need to win. You can't lose two straight at home to the Devil Rays in September. It was 8-1 through three and half when the Sox got to Tampa Bay starter Andy Sonnenstine for four runs in the fourth. They continued to chip away, and with the game tied, 9-9, Kevin Youkilis banged a triple off the wall with bases loaded to put the Red Sox ahead to stay.

The final score was 16-10. Mike Lowell had four hits, and David Ortiz, Jacoby Ellsbury, J. D. Drew and Dustin Pedroia all added home runs. For the second time in a week, the Red Sox won a game when they gave up ten runs.

The Magic Number dropped another number, as the Yankees won in Toronto. Today we honor former shortstop and third baseman, Jersey City native and Seton Hall grad John Valentin. He was a solid ballplayer for the Red Sox in the mid-to-late 1990s, and will always be remembered for moving to third to allow a rookie named Nomar Garciaparra to come up and play short in 1997.
Posted by The Omnipotent Q at 12:31 PM

John Grew up in JC,NJ, but, there was a point when he lived over by Acqueduct Race Track, in South Ozone Park, in an area, named for a Pitcher, named Wakefield.