Is Dice-K Hitting the Wall? 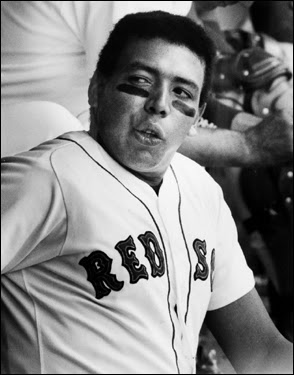 I expected to see a baseball game at Fenway last night, but what did I see? A score reminiscent of many NFL games.

A 10-1 laugher in the sixth inning over the Toronto Blue Jays turned into a game that made just about all of Red Sox Nation do a collective sweat. This looked like a game the Sox could coast to a win, but that didn't happen.

But last night, the Sox gave him 10 runs after just four innings, so it seemed like a victory was assured. But Dice-K did everything to make it interesting. He was raked over the coals in the sixth, as he gave up six runs in the inning, including a three-run homer to Troy Glaus. Terry Francona finally came to his senses and got him out of there, but Javier Lopez allowed two more runs, as he couldn't find the plate. Manny Delcarmen finally got the Sox out of the inning, but Toronto scored eight runs, and a nine run lead was suddenly a one-run lead. And if not for a sliding catch by Jacoby Ellsbury, it actually might have been tied.

The game was one of those "nothing ever comes easy with the Sox" games. The Yankees had lost to the Mariners this afternoon, so a golden opportunity to put some more distance between them looked like it was rapidly evaporating. Watching the last four innings was pure hell last night.

But the Sox offense answered back the eight runs with three more of their own, and the Red Sox bullpen shut down Toronto the rest of the way to gain a 13-10 win. It took over four hours, and probably took about five years off my life watching that lead drop.

Getting the Ws is most important, but Dice-K looked horrific in that sixth inning. He pitched five good innings before the roof caved in. In his last two outings, he's given up 12 earned runs in the last 11+ innings. You have to wonder if the longer American season has taken a toll on him. In Japan, they play 140 regular season games, and Dice-K pitched in a six-man rotation.

Coming down the stretch, it will be interesting to see how the Red Sox use Dice-K. I would bet Tito will try to get him more rest, especially when the postseason rolls around.

The Red Sox are now 7 up in the American League East, and with the Yankees loss at home, the Red Sox Magic Number is now at the number of the man pictured in this post. Can you remember him? He played on some Sox teams of the late 1980s and early 1990s. I always liked this guy....one Carlos Quintana. (Thanks to my friend Adam in NYC for the photo.)

Yes, I could have used Dice-K's pic, or that guy who wore his number before him. (His name currently escapes me.) But I don't write about Carlos Quintana every day on this blog.
Posted by The Omnipotent Q at 1:03 AM

Expand the rotation by one (Buchholz) for the coming week and see if the extra day helps.

I don't think Buchholz will start again this season unless the Sox really need him. he's approaching a limit they put on him before the year started. I'd bet will see him in the bullpen for now.

What do you have against Jason Johnson? :) Technically, he was the last guy to wear 18 before this season...

Where is my memory?? How could I forget such a Hall of Fame caliber pitcher?

I immediately recognized "the Q"! For some reason, he and Glenn Hoffman are the first two Sox I think of when I hear the number 18. Hey, have I said this here before? Sounds familiar. Anyway, when I saw his pic, I thought, Oh no, someone's beat me to my idea! (I'm going to be starting a series any day now about all the major leaguers who ever shared my last name. It will be insanely long, as my last name is Smith. But I thought maybe you were gonna do "the Qs of MLB" or something.) (Which I encourage you to do--just don't give away my idea to anyone named Smith, ha.)

Sounds like a great idea, Jere. Thanks for suggesting it. Tons of Smiths in MLB history, where do you start? There have been a few Quinns, even some John Quinns in MLB. Did you know the Sox owner before Tom Yawkey was J. Robert Quinn, whose real first name was John? Yep, a John Quinn once owned the team, but at it's absolute nadir!! Thankfully he wasn't related to me...

Had to put a fellow "Q" in picture #18! And I do believe you've mentioned Glenn Hoffman here before...

There are so many Smiths that by default, there had to be at least one with an unusual first, or nick, name. Some: Pop-boy Smith, Skyrocket Smith, and Phenomenal Smith!