Why The Nation Despises The Carpetbagger 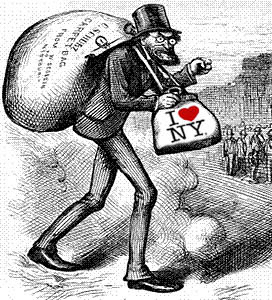 My friend Adam yesterday sent me along one of the best columns by Bill Simmons, the noted writer, Red Sox fan and author of "The Sports Guy" column at ESPN.com. Back in 2001, Simmons was asked by his bosses to write a column about why Red Sox fans hate Roger Clemens so much. With all the palaver about The Carpetbagger's return, I thought I would share the column with all of you. (I think that old Thomas Nast cartoon from the 19th Century seen here really applies, especially with the updated bag he's carrying. He looks a little like Clemens too, don't you think?)

Even though column was written nearly six years ago, it really does ring true today. This column was also included in the wonderful "Now I Can Die In Peace" book that Bill Simmons put together after the Red Sox championship in 2004.

And the column also has the perfect name too: "Is Clemens The Antichrist?"

I'll leave it for all of you to decide that. It's great reading, as well as funny and rather infuriating at the same time.

Great Caesar's Ghost, that was a brilliant piece. How about THIS beautiful line:

"Instead of a team logo, the cap on his Hall of Fame statue should simply feature a dollar sign."

Thanks, Perry White, er, Ken. I love Bill Simmons' stuff, and this was a classic.

I didn't realize that they had steroids in the time of Thomas Nast:

& the guy does resemble Roidger a bit

Interestingly enough, I found something about a pitcher using PED's as early as 1889.

Pud Galvin of the Pittsburgh NL team regularly injected himself with monkey testosterone. I think all records since that time are tainted and should be expunged from the books.

I crap you negative:
http://en.wikipedia.org/wiki/Pud_Galvin

Figures I guy called "Pud" would do something like that...