It Never, Ever Gets Old 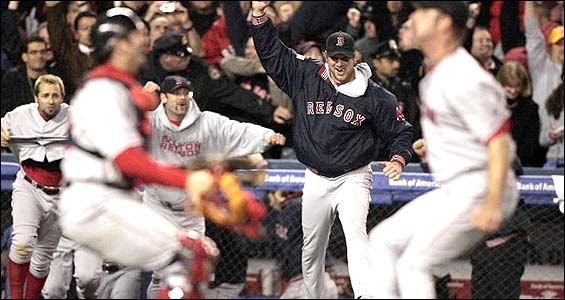 As I was at Professor Thom's pub tonight watching the Red Sox sweep the Detroit Tigers tonight (their lead is now 9 1/2, folks), I was looking at one of the other screens that had the NBA playoff game between Detroit and Chicago on. And a scene came up that instantly put a big smile on my face.

The Bulls were facing elimination tonight in their series, and were down 0-3 in it. When I happen to look, TNT flashed on the screen that no NBA team has ever come back from an 0-3 deficit to win a postseason series (although a few have reached Game 7 after being down that much). They also showed that only three teams in any sport have ever come from 0-3 down to win a postseason series, two in the NHL, and as they were showing the graphic, the video of Jason Varitek jumping into Alan Embree's arms (like in the photo here) on that glorious night in The Bronx in October 2004 came on.

It just never gets old. For as long as I live, whenever a baseball, hockey or basketball team falls into an 0-3 best-of-seven hole, the Red Sox 2004 comeback against you-know-who will forever be mentioned. Incredibly sweet.

The best part of what the Red Sox did in 2004 was the history that they made in that ALCS. It will live forever, and will grow in stature as the years pass along. Mark my words.

And, oh yes, the Chicago Bulls were swept by the Detroit Pistons tonight.

I'm off to Fenway on Friday to see Devern Hansack take on the Atlanta Braves. Weather permitting, of course.
Posted by The Omnipotent Q at 12:21 AM

The mention of the 2004 ALCS may well outlive its memory. I won't ever tire of the comparison every time a team is down 0-3 in a best-of-seven series.

To be fair to the Tigers and Verlander in particular, John, they did win one of those four games. It wasn't a sweep.

I meant the Red Sox swept the doubleheader yesterday, not the series. The Tigers have a very good team, uptown, and they could very well meet the Red Sox again in the postseason.