And The American Idol Winner Is... 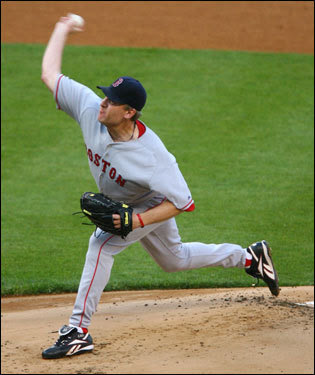 Who gives a damn.

In more important news, Curt Schilling had his third consecutive subpar outing, giving up 6 runs on 12 hits in 6 innings at Yankee Stadium last night in an 8-3 Red Sox loss. He looked lousy from the start, as the first three hitters all scored, the last being on Hideki Matsui's home run.

Schilling gave up runs in the first four innings, and you know he was having a terrible night when Doug Mientkiewicz hit a line drive home run off the Yankee Stadium facade in right field.

In the first inning, Coco Crisp was called out at second base on a stolen base attempt, when in reality Robinson Cano clearly missed the tag. He argued to no avail. Another night, another blown call by an ump. Is it me, or is the umpiring getting worse and worse in baseball? I'm not writing this because of the missed call against the Sox last night, but it seems the umpiring, not just on the bases but at home plate as well, is really getting worse and worse. Umps are missing routine calls on the bases at an alarming rate.The strike zone seems to be different for every single umpire. I think it's time for MLB to address this problem. Umpires should be judged the way the NFL judges its officials. They weed out the less competent ones. An MLB umpiring job should be earned and kept on merit. It shouldn't be a lifetime appointment, like being The Pope or a Supreme Court justice.

The interest in the game by the fourth inning at Professor Thom's started to wane to the point where Roger Clemens' minor league start at Trenton on ESPN was getting more interesting, and The Man Every Sox Fan Loves To Hate had a rather uninspired outing, giving up three runs in 5 1/3 innings to the AA Portland Sea Dogs, the Red Sox' Eastern League affliate. He's clearly not ready to pitch in the majors, let alone face the Red Sox at Fenway next weekend.

So at least the night wasn't a total loss.

I also met Jim "Suldog" Sullivan, of the "Suldog-O-Rama"blog, for the first time last night. He stopped by the bar with his brother-in-law John, as he was in town for the day yesterday. It was good to meet you, my friend. Wish we could have had a better Sox game to enjoy.

The Red Sox leave New York up by 9 1/2, and now head for a weekend series in Texas against the Rangers. Schilling continues to be a concern. His command and location was not good again, and you have to hope he's just going through a slight downturn. His next start will be against Cleveland Monday night at Fenway.

The Red Sox and Major League Baseball. The ONLY "reality TV" I watch. Or care about.
Posted by The Omnipotent Q at 11:03 AM

Speaking of bad umpiring, is there anything that MLB can do to get C.B. Bucknor to tone down his over exaggerated punch out call. After Lugo's complaining, Francona had to go out to tell Bucknor to calm down, then, it seemed each successive punch-out got bigger and lounder and more exaggerated, it seemed as though he was playing to the Yankee Stadium crowd, so much so that he didn't even pause to consider Coco's check swing.

The Winner of "American Blohole" is George Steinbrenner, who must be in his "Larry David" Version, crazy enough to sign Roger Clemens:

I'm waiting for Steve Carlton to be signed, along with Gary Gentry & Nolan Ryan;

& all is NOT LOST, as Oliver Perez pitched a shutout with Mets popping the Braves 3-0 in Atlanta:

Francessa once stated that Perez was NOT a Money Pitcher;

Francessa is FAT & should shut up.

I also hate those umps who want to be part of the game, like Bucknor. Not one fan buys a ticket to see those guys. I remember an ump back in the 1970s named Dutch Rennert who went into his own little routine EVERY time he called a strike. It was very annoying and he wasn't a very good ump either.

Very nice meeting you the other night. I passed the test - now I get to see if they liked my personality. I wrote it up - plus other details of my day - on my blog today.

Great meeting you too. I saw the post on Friday, Suldog. Thanks for the kind words, and good luck getting on the show...