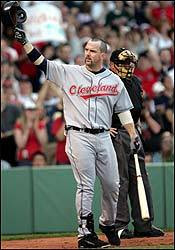 It was a night of nothing but class when Trot Nixon return to his old haunt, Fenway Park, last night. Trot got ovations all night, first when he came out to practice, when his name was read in the lineup, when he took his position in RF (nice to see him tip his cap), and then on his first at-bat of the night in the second. Curt Schilling walked off the mound so Trot could tip his cap again and enjoy the standing ovation, one he richly deserved.

In a really cool and classy move by the Red Sox, Trot's wife Kathryn threw out the ceremonial first pitch, and the Nixons were also honored with a plaque for all their good work they did for the Jimmy Fund at home plate before the game.

Trot wasn't the best player to ever where the Red Sox uniform, but his hard-nose, take-no-prisoners style endeared him to Red Sox fans everywhere. It's a shame he had to leave, but I wish him success in the future. He was the Original Dirt Dog, and he'll always be One of the 25. God bless him and his family.

The Red Sox won a nail-biter at Fenway last night, 5-3. Curt Schilling pitched seven solid innings, and Kevin Youkilis hit a memorable inside-the-park home run, the first by the Sox in two years. (Trot Nixon hit the previous one, against the Yankees in 2005.) It was also a "stand-up insider-the-parker" as well, and Youk also now has a 20-game hitting streak.

Jonathan Papelbon struggled a bit in the ninth, as he allowed a run and the first three hitters to reach base. But then he came back to get Grady Sizemore to opo out, and then struck out the next two hitters, including the dangerous Travis Hafner to end it.

The Yankees loss in Toronto now puts them 13 1/2 games back, and in a tie for last with Tampa Bay in the AL East. The Yankees, along with the Devil Rays, are now the most games behind any first place team in baseball, including the Nats and Royals. Josh Beckett makes his return from the DL tonight at Fenway after his finger injury. I wish I could see it, but I will be at Shea tonight, letting Barry Bonds know what I think of him.
Posted by The Omnipotent Q at 12:56 PM

I wonder if Bonds will go on the DL, just before Fenway?