"Big Papi: My Story of Big Dreams and Big Hits" 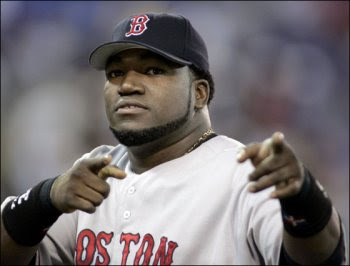 Recently I picked up a copy of "Big Papi: My Story of Big Dreams and Big Hits" by David Ortiz and Tony Massarotti, the Red Sox writer for the Boston Herald. When you pick up these kind of books, you always approach them with a sense of caution.

Many times, these are "knockoff books, " written to exploit the market and make a quick buck from a celebrity who's hot at the moment.

I remember in April 2005 when I picked up the book "Idiot," the book about Johnny Damon, written by Peter Golenbock. That book was absolutely one of the sloppiest written and badly edited books I have ever read in my life. It was loaded with not just typos but facts that the author simply got wrong. It was an embarrassingly bad book, quickly put together to exploit Damon's new found popularity after the Red Sox won the 2004 World Series. (And I wrote this about "Idiot" while Damon was still with the Sox, so don't accuse me of sour grapes because Judas went to New York!)

So when I heard that David Ortiz had come out with a book about his life and baseball, I approached it with the lousy experience in mind I had while reading, "Idiot."

I need not have worried. "Big Papi" is absolutely an enjoyable read, and Tony Massarotti has done a very good job with the book. (I looked for the same type of errors I found in "Idiot" but found extraordinarily few.) David Ortiz comes across as he does in real life: a fun-loving man who enjoys life and the work that he does. (And I love the fact he refers to the reader in the book as "bro." It's used many times throughout the book.)

Papi is a proud Dominican man who loves not just his homeland, but his adopted home as well, and especially Boston. He talks about the secret of his success as being not just hard work, but patience. He was raised with a lot of love from his parents, although they divorced when he was a teen, and the support he got from them helped him get where he is today. He talks of enduring the tragedy of the loss of his mother in a car accident in 2002, and how it changed him. His father was his driving force to succeed in baseball, especially when he endured the tough times, in the minors and in Minnesota.

Papi seems to get along with everyone, as you would guess. He has a lot of affection with the guys he came through the system with in Minnesota, like Torii Hunter and Corey Koskie. But one of the very few people he never seemed to have liked at all was Twins' manager Tom Kelly. He respected his championships, but found him to be a "hardass" who "never gave me a chance." Papi felt he was typecast in Minnesota as a part-time DH who would never get a chance to shine.

He was actually rescued from that when the Twins released him in 2002. At first he was devastated, but once Pedro Martinez recommended the Red Sox sign him, he was on his way to success. Papi adores Pedro, as you might guess. He really says nothing bad about opposition players, especially the Yankees. He respects all of them, as well as the organization. He also loves all of his teammates, especially "The Idiots" who won it all in 2004. Papi doesn't spend a lot of time in the book rehashing the memorable events of that amazing postseason, but it's still enjoyable getting Papi's take on it.

I also like the fact that Massarotti writes separate chapters in the book about Papi from the perspective of people like Pedro, Torii Hunter, Theo Epstein and Terry Ryan. There's also a great picture in the book of a young David Ortiz with Mo Vaughn at Fenway Park during Papi's rookie season in 1997. (Of the photo, he talks about "how Mo was beloved by the fans, and that's something I always hoped would happen to me." I think he got his wish.)

I would definitely recommend "Big Papi: My Story of Big Dreams and Big Hits" to any Red Sox fan who would like a light, enjoyable read from one of the most beloved players in team history. It's definitely no "knockoff" book, and Papi and Tony Massarotti should be proud of the book they collaborated on.
Posted by The Omnipotent Q at 1:04 PM

Good to hear the book is good...I'd heard elsewhere it was, uh, not so good. I'll have to check it out.