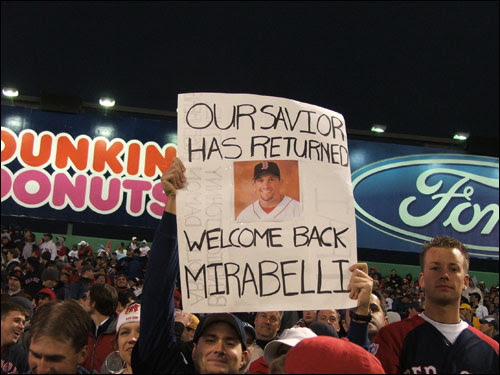 Doug Mirabelli and that original funny post I put up has brought countless people to my blog since last July. It has made its way around Red Sox Nation and made Doug something of a cult figure.

Well, since today is an off-day for the Red Sox, I thought I would put up another silly Doug post, this one based on the day of Doug's return to the Red Sox back in May of 2006. I found the post on a site dedicated to Doug, called "Dougie's Going Deep Tonight!" (www.dougiesgoingdeep.com) I also believe that the post was originally written by a Red Sox fan over at the Sons of Sam Horn site, and it was written on the actual day of his return. My thanks to him for writing a great post.

For those of you who have not read the original post, "A Day In The Life of Doug Mirabelli," here it is again: http://quinnmedia.blogspot.com/2006/07/day-in-life-of-doug-mirabelli.html

Yeah, that was on the SOSH board awhile back. Classic.

That motorcade was quite the surreal scene.

As a Padres fan thank you for Josh Bard and Cla Meredith. Both have been awesome. Dougie didn't fit in San Diego and didn't understand why he couldn't be the # 1 catcher when the Padres signed Piazza last year.

You're very welcome, Ken! Theo Epstein admitted in a radio interview earlier this year that that trade was a mistake, and basically a panic move when Bard was having all kinds of trouble handling Tim Wakefield's knuckler.

But damn it was funny as hell. Doug Mrabelli would be in a psych ward heavily medicated if he he were that much of a sociopatic nutjob.

so Did Dougie go deep that night??

It certainly is all the things you described and more. And it's a riot as well...

No, Dougie didn't hit any bombs that night,as he promised. But his mere presence was a boost to the club. (Oh, I'm sorry, that was Yankee fans and some idiots on TV talking about the return of The Carpetbagger and how he'll revitalize that team. Again, sorry.)