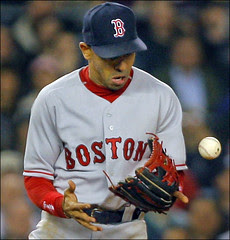 I was shocked on Wednesday to see that Julio Lugo Era ended in Boston not with him getting released by the Red Sox, but he was actually traded with cash considerations to the St. Louis Cardinals for outfielder Chris Duncan and a player to be named later. Duncan will be sent to AAA Pawtucket. He is also the brother of Shelley Duncan of the MFY, who is best known for this act of stupidity.

Wow. I would have accepted a couple of broken bats and a used ball bag in return and considered that a fair deal. But Theo Epstein actually got somebody in return for him.

He really must be a genius.
Posted by The Omnipotent Q at 1:29 AM