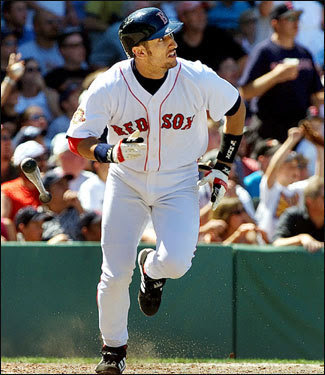 The Red Sox avoided the indignity of being swept by the Seattle Mariners at Fenway Park for the first time ever (yep, they've never swept at Fenway, and still haven't), as the hometown team rallied for five runs in the seventh and won, 8-4.

For the third straight day, the Sox opened with a 2-0 lead, only to see it disappear. And this time at the hands of Ronny Cedeno again, who hit a triple down in the right field corner with the bases loaded to get Seattle the lead.

Jon Lester looked shaky a good part of the game. He did strike out 10, but put runners on in just about every inning. David Ortiz, who homered in the first, singled in the tying run in the seventh with two outs, and after a run was walked in, Mark Kotsay singled in two. The last run scored on a passed ball. The Sox scored all the runs with two outs.

The bullpen shut down Seattle the rest of the way, and Justin Masterson got the win. New York won again with a Win Tunnel Special, a 10-8 win, bailing out Joba Chamberlain's ass once again. The Red Sox still lead the AL East by one game.

Tonight will be a special night at Fenway Park. John Smoltz makes his Fenway Park Red Sox debut against the Oakland A's. But that will be overshadowed by the return of one Nomar Garciaparra, who comes back to park he called home and left back in July, 2004. (The last games he played at Fenway was that memorable Yankees series that year, the one that included Slappy getting a gloveful of Jason Varitek and Bill Mueller's game-winning blast off Mariano Rivera. Remember Nomar's double early in that inning?)

Nomar will get the standing ovations he so richly deserves. It should be one helluva memorable night tonight.

UPDATE: The Red Sox put Jeff Bailey on the DL today, with a ankle sprain he suffered in Saturday's game. They brought up first baseman Aaron Bates, who will make his MLB debut tonight at first.
Posted by The Omnipotent Q at 11:29 AM