Fog Out In Coney Island 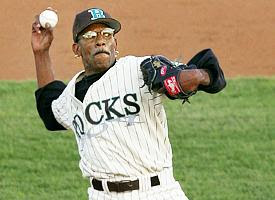 I went to the Brooklyn Cyclones game on Friday night, as it was "FDNY Night" at KeySpan Park, honoring New York's Bravest. There was a fine crowd on hand, as the Cyclones draw very well on Friday nights. The Cyclones were playing the Auburn Doubledays (Blue Jays' affiliate).

It was a briskly moving game, and by 8 PM it was in the fifth inning. The Cyclones scored a run in the first and it held up into the fifth. Collin McHugh of the Cyclones was pitching a dandy and allowed just two hits. But I noticed as the game was moving along, some fog was coming in from the west, and some buildings on Surf Avenue were disappearing from view.

But with one out in the bottom of the fifth, it became really thick and the umps and managers got together and held up the game. Then the raindrops started and I called it a night. It was apparent the fog was going to abate for the rest of the night, and it was silly to hang around.

I got home a short while later (at least I had a Red Sox game to come home to and they won) and the game was called where they stopped, a 1-0 Cyclones victory.

It was the first game I've ever been to that was called on account of fog. And as the delay began, I could only think of one person and a famous quote he once made regarding an MLB game that was called because of the same reason.

"That’s what they get for building a park on the ocean."

That famous line was by the immortal Oil Can Boyd (pictured pitching with the Brockton Rocks last year), who said that during a game the Red Sox were playing in Cleveland in 1986, a rather fair distance from any ocean.

I guess that's what the Cyclones get for building their park on an ocean. One that was just a bit bigger than the one Oil Can thought he and the Sox were fogged out by so many years ago.
Posted by The Omnipotent Q at 10:22 PM