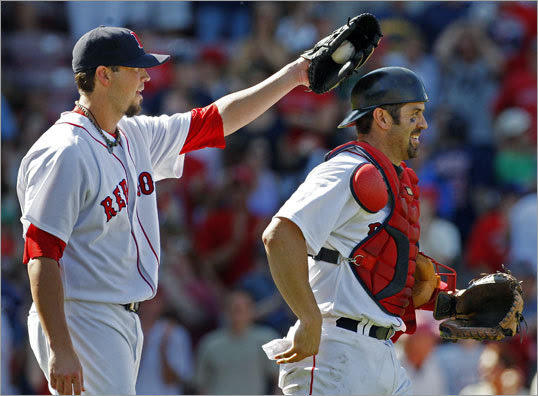 Josh Beckett reached the century mark in wins for his career on Sunday, spinning a three-hit shutout over the Royals, 6-0. The Commander was in total command all day.

The All-Star Break arrived and Beckett is simply on an incredible roll. In his last 13 starts, he is 9-1 with an ERA of 2.40. He was in trouble just once on Sunday, loading the bases with one out in the seventh. But he got the Pitcher's Best Friend, a groundball double play to second, to get out of the jam.

Beckett threw just 94 pitches, and got his 11th win of the season, tying teammate Tim Wakefield for the AL lead.

The Red Sox jumped on Bruce Chen of the Royals early, getting a run in the first. He was on the ropes in every inning, but the Red Sox finally put more runs on the board in the fourth, making it 4-0. The one run was all Beckett needed, as he didn't give up his first hit until the fourth.

It was a memorable day for Aaron Bates, who figures to be returning to Pawtucket once the break ends. He had three hits and an RBI, and just missed a fourth when he lined out to right. Kevin Youkilis had two hits and an RBI, and seems to be out of his slump. Jacoby Ellsbury had his 40th stolen base of the year and scored a run.

It was a bizarre day for Jason Bay. He drew three walks (all four pitch walks) and was hit by a pitch twice. He saw 20 pitches and 17 of them were balls. He had five plate appearances, and was officially 0-for-0.

The Red Sox end the first half at 54-34, three games ahead of New York, who were swept by the team that always gives them fits, the Angels, in Anaheim. After the game, Terry Francona announced that Clay Buchholz will be brought up from Pawtucket on Friday and make his first start of the year, as both Josh Beckett and Tim Wakefield will be going to the All-Star Game. (Beckett figures not to pitch as he went yesterday.) It will be a spot start against the Blue Jays in Toronto.

Brad Penny will pitch next Saturday, and Jon Lester will close the series against the Jays next Sunday. John Smoltz will open the Texas series the following Monday, and he'll be followed by Beckett and then Wakefield.
Posted by The Omnipotent Q at 11:23 AM