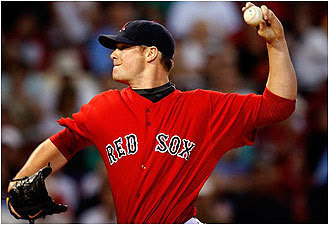 Jon Lester continued to own the Kansas City Royals, and got the bare minimum of offense to get the win.

And with no help from a home plate umpire in dire need of a seeing eye dog.

Lester was magnificent again last night, pitching eight shutout innings and allowing just four hits for his seventh win. It was his first time facing Kansas City since his no-hitter against them in May 2008. And now he has gone the last 25 innings against them without allowing an earned run.

He also just filmed a commercial for Nike's "LiveStrong" campaign, in support of people with cancer. He certainly was that, and a whole lot more.

Brian Bannister was just as good last night, if not better for the first seven innings. The Red Sox got just one hit against him, and it looked like another night of the Red Sox making a rather mediocre pitcher look like Sandy Koufax again.

In the fifth, the Sox had first and third with one out, and Mark Kotsay broke for second, in a play designed to get the run home. Kotsay stopped, and was caught in the rundown. Jacoby Ellsbury then broke for the plate, and clearly had touched home before Miguel Olivo's tag. But ump Derryl Cousins called him out, and then tossed Ellsbury out of the game for tossing his helmet in frustration. Once again, poor umpiring reared its ugly head again, and this time it looked like it could cost the Red Sox a game. It would nice if Cousins would admit he blew that call, but the arrogance of most umps will most likely not allow that to happen.

The tossing of Ellsbury actually had a silver lining to it. In the seventh, Kansas City had two on and no outs and Rocco Baldelli, Ellsbury's replacement, caught a deep drive on the warning track and threw a strike to Dustin Pedroia, who nailed Mark Teahen at second. It killed KC's rally, and it's a throw Ellsbury would not have been able to make.

Finally in the righth, Bannister's bubble burst. Kotsay singled to center, and pinch-runner Aaron Bates moved to second on Nick Green's sacrifice, moved to third on a passed ball, and scored when Dustin Pedroia banged one off the Green Monster to bring him in with the only run of the game.

Jonathan Papelbon wasn't fooling around in the ninth and got the Royals 1-2-3 for his 23rd save of the season. New York and Overrated Chamberlain blew a four-run lead in Anaheim last night, 10-6, to put the Red Sox back alone in first place in the AL East late last night.
Posted by The Omnipotent Q at 10:22 AM