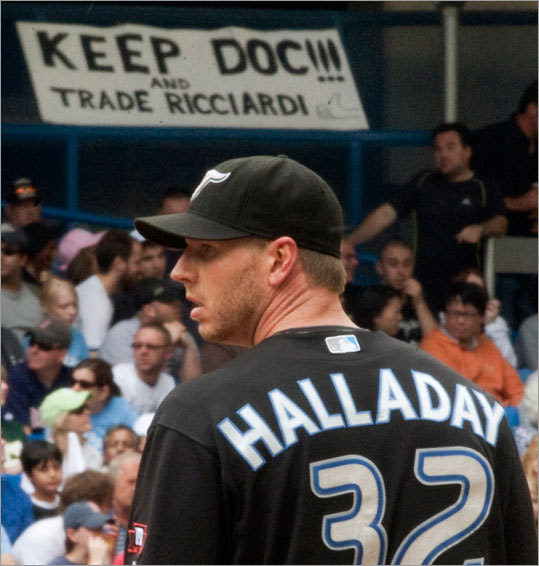 The Red Sox were fortunate in the previous two series they played against the Toronto Blue Jays that they didn't have to face Roy Halladay. Well, their luck ran out on Sunday.

Halladay brought his A game to the Rogers Centre and outdueled Jon Lester as Toronto won, 3-1 and took the weekend series.

He showed why he's still one of the elite pitchers in this game today, as the Red Sox had him on the ropes in two of the first three innings but they could only get one run off them. The Red Sox hit him hard in the first, as hits by Dustin Pedroia and Kevin Youkilis were followed by a sacrifice fly by David Ortiz. Jason Bay then hit a blast that Alex Rios caught in front of the wall to end the inning.

In the third, the Sox had two on and one out and couldn't get anyone else in. And from that moment on, Halladay took over. He retired 18 of the next 19 batters he faced in going all the way to get the win.

Jon Lester wasn't bad at all, but his control deserted him at the wrong time. In the second innings, he walked back to back hitters and seemed a bit unnerved, as some the ball calls were very close. But Rod Barajas made him pay by slapping an RBI double to give Toronto a 2-1 lead. Barajas later added a sacrifice fly to make it 3-1. Lester walked a season-high four in seven innings.

There has been a lot speculation that Halladay is on the move on July 31, but my gut feeling is that he will still be in a Blue Jays uniform on August 1. He's not a free agent until after next season, and there's no pressure to move him now. And Toronto is asking for an exorbitant price for him. I also wouldn't bet on him going to the Red Sox or Yankees. Theo Epstein loves the young pitching prospects and Toronto would want at least two. Epstein would rather hold on to them than to have to pay Halladay, who is now 32, a long term deal for at least $15 million per. I wouldn't bet on New York either, as GM J.P. Ricciardi would rather send Halladay out of the AL, or at least the division.

The Red Sox move on to Texas tonight, with John Smoltz getting the ball. They are now just one game up in the AL East, as New York swept Detroit this past weekend.
Posted by The Omnipotent Q at 11:08 AM