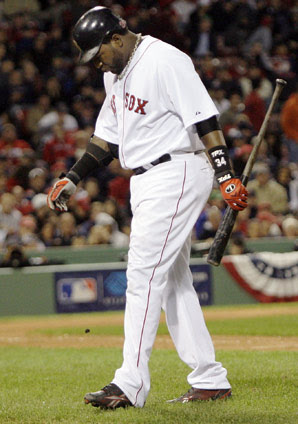 As the entire baseball world knows by now, David Ortiz and Manny Ramirez' names were mentioned in a New York Times article today, outing them as players who tested positive in the survey MLB conducted back in 2003 when they finally came into the 21st century about testing for performance-enhancing drugs.

In the previous post here, I question exactly who revealed these names, why they did it now, and why no one else was mentioned as well. (And I said the same thing when Alex Rodriguez was outed last February.) It makes me wonder if these "shadow figures" have some type of agenda or what. We'll probably never get answers to those questions.

MLB and the Players Association are probably seething over this article today. The last thing they want is to have names from that List of 104 come out.

Ortiz has not addressed the issue yet, and at some point he will have to explain his side. Papi has always been on the side of law and order when it came to steroids in baseball, which led me to believe he had no skeletons in his closet. The overwhelming reaction to today's revelations doesn't seem to be a big surprise. Chalk up another one for the "everybody's doing it" crowd.

If true, I can't see how this won't hurt Ortiz and his legacy. I am most disappointed by his tough stand on PEDs, and how it now appears he had plenty to hide. (He said this earlier this year, from Steve Buckley of the Boston Herald):

“I would suggest that everyone get tested. Not randomly. Everybody. You go team by team, you test everybody. Three, four times a year.”

As for players who tested positive, Ortiz said, “... you’re gonna be out. Serious. And period. Ban ’em for the whole year.”

“I know that if I test positive, using any kind of substance, I know that I’m going to disrespect my family, the game, the fans, and everybody. And I don’t want to be facing that situation. So what I will do is, I won’t use it.”

Really strong words. But now they sound extremely hollow. Papi deserves to have his side of the story told, and I hope he will, and as soon as possible.

As far the Red Sox championship teams of 2004 and 2007 goes, that is done. Move on. The Sox won those titles, and they are in the record books. Anyone who suggests asterisks be placed next to them (and you know hypocrite MFY fans will), take a look at the era. You'd have to put asterisks on every team's titles for the past 20 years as well. I've never been naive enough to believe that the 2004 Red Sox were completely clean. They had their juicers like the Yankees had during their last four title teams as well. I would bet every team, no matter where they finished in the standings in this generation, had someone taking PEDs.

I don't believe in asterisks for anything concerning baseball records. The one on Roger Maris' home run title in 1961 was moronic. I don't believe in putting them on Barry Bonds home run records or anything else in the books. Fans will decide for themselves about records and the like. Baseball didn't put one on the Cincinnati Reds' 1919 World Series win over the Chicago White Sox, who just happened to be in the bag of gamblers in that series. (There were calls to erase it from the record books from some circles, but that was wisely ignored.)

When a team wins a championship, it is forever. Nothing can change that.

I'm still reserving my thoughts about what happened today with David Ortiz and the New York Times revelations. I want to hear Papi's explanation first.

But I am really disappointed in him.
Posted by The Omnipotent Q at 3:38 PM

I just don't think that the why or how of the names being released is the point. Is it odd, or unethical, or part of someone's agenda? Possibly, maybe even probably. But to me the point isn't the outing of the players; the point is that their names are on that list in the first place. Frankly, I'm really sad about all this. Not surprised, maybe, but really sad, nonetheless. What's the point of rooting for these guys anymore? Why put our faith in people that don't have it in themselves enough to avoid this crap? I'm not a fan of pro wrestling, even when, apparently, it is played with a bat and ball.

I understand your feelings, Matty. I'm more sad and disappointed than anything else myself. Surprised? Well, not really.

I really thought Ortiz was not part of that culture.

Still, I want to know how some names have been leaked out and why.

I agree with Matty. I don't care about who leaked or why. It doesn't matter. What difference does an agenda make to the facts of the case? Just MO, but I think people are focusing on that to deflect from the fact that this is really, really painful and they are looking for someone else besides their favorite player to be angry at. Right now they are angry that they know the information, not the information itself.