Lifeless on the Fourth 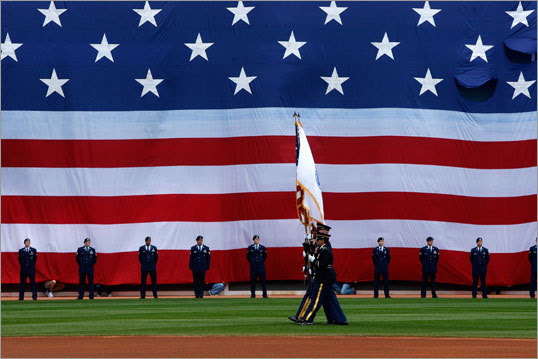 I really thought that Takashi Saito might be the sleeper pickup of the winter for the Red Sox, one of those moves that slips under the radar for the most part and, like Mike Timlin in 2003 and Hideki Okajima in 2007, who be a valuable addition to the Red Sox bullpen.

Saito is turning into the Red Sox garbage time reliever, and yesterday seemed to take another step in that direction, as with the game tied 2-2 with one out, proceeded to walk the bases loaded. The Sox had to bring the infield in, and ex-Met Chris Woodward hit a cheap dunker over Dustin Pedroia's head to bring in the go-ahead run and the Seattle Mariners won, 3-2 on Independence Day.

I had to watch the game on MLB.tv (thanks Chris) because the game was blacked out outside New England thanks to those stupid Fox Saturday rules. (They couldn't wave that for the Fourth of July?) But there wasn't much to watch as the Red Sox looked pretty lifeless yesterday. Jason Varitek blasted a two-run shot in the second, and they left second and third to end the inning.

They got just two hits after that, and had only one real threat afterwards. Brad Penny pitched six strong innings and allowed just two runs and got the no-decision.

New York won in extra-innings over Toronto, so the Red Sox lead is now down to one game. Jon Lester takes the mound today as the Red Sox try to avoid a home sweep.
Posted by The Omnipotent Q at 11:35 AM