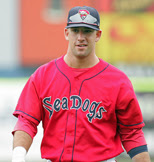 I write that title as my blog post because tonight I had a whole slew of hits on my blog from many people Googling "Ryan Kalish" and "Jewish."

I was curious too, and I looked him up, and it turns out the Red Sox outfielder went to Red Bank Catholic High School in New Jersey. So for those of you who were curious, I guess that's your answer. (I read in an article in the Hartford Courant that Kalish is of Polish descent. His grandparents were sent to Germany during WWII to work for the Nazis, but there was no mention of their being Jewish. Many other articles I checked on the Internet about Kalish, like his Wikipedia page, made no mention of his being Jewish either. But if I am wrong, please do let me know and I'll be happy to post it.)

The Sox have also had a number of prominent Jewish players in recent years, like Kevin Youkilis, Gabe Kapler, Adam Stern and Craig Breslow, so I would think if Kalish was also of that faith it would have been written about or mentioned some place in that context.

UPDATE (8/20): I received a note here from a man named Michael who says he knew Ryan Kalish in Brookline, MA, and says that Ryan's dad is Jewish. Thank you, Michael.

Anyway, the aforementioned Mr. Kalish hit his first MLB home run tonight, and he picked some spot and some game to do it in: at Yankee Stadium, and it was the insurance the Red Sox needed as they won a very important opening game to a wrap around series with New York, 6-3. (And I guess that was the reason so many folks were curious as to Ryan's heritage.)

David Ortiz opened the festivities with a first inning home run, but Mark Teixeira hit a two-run shot off Clay Buchholz to make it 2-1. But the Sox answered that with three in the second to make it, 4-2, as NY catcher Francisco Cervelli dropped Mike Lowell's pop-up, and all the following runs that followed it were unearned.

Buchholz went 7 1/3 innings, allowed three runs on nine hits, while striking out four and walking none to get his 12th win. Daniel Bard and Jonathan Papelbon pitched hitless relief with Pap getting save number 27.

It was a huge, big time win for the Sox. They've now won 8 of 11. One win from the remaining three will give them a split they need from this weekend. They trail New York by 5, and Tampa Bay by 4 1/2 games, who lost in Toronto tonight, 2-1. Before the game, the Red Sox disabled Hideki Okajima, and brought up Felix Doubront, who will take his place in the pen.
Posted by The Omnipotent Q at 11:01 PM

great game! I was curious about Kalish too! He has a "gamer" quality I like.

I have a lot of friends who went to Catholic High Schools, and they are jewish, the fact that he is an athlete makes it more possible that he could be jewish, cause most of the jews I know who go or went to cathoic schools went for sports.

I went to a Catholic high school 25 years ago because it offered the best educational opportunity (as my parents so believed). I am Jewish.

I like what I see from Ryan Kalish, Ed. He so far looks like a good solid player, and was thrilled to see him hit his first MLB home run in Yankee Stadium. And an important one, too.

I am a fellow Alum of RBC HS in NJ, albeit an older one than Kalish, but we did have Jewish students in attendance. Saw first hand Kalish's Grand Slam last night at home against LAA...way to go Ryan! Represent the Caseys proud!

I have no doubt there have been Jewish athletes who have gone to Catholic schools, Stodds. This could have been the case with Kalish, but I found nothing on the Internet in any article about him that says it. And no one has written to me or left a message with anything that shows what faith he actually is. I'll have ask a friend to check with the Sox and find out what he is.

His Dad, Steve, is Jewish. I grew up with him in Brookline. His grandparents were in Nazi workcamp.

Thanks for confirming that, Michael. I'll put an update on the blog here.

Seriously folks, why do we care what a BASEBALL player's religious beliefs are? I'll never understand this. We are so much more as a society than our various religious beliefs. Until we stop this, we will always remain a split society.

I understand your point, Steven. But I would guess most of the folks wondering about Ryan's faith are probably also Jewish themselves. And since there are relatively few Jewish major leaguers, Kalish would be looked upon as one of their own. Reminds me of Hank Greenberg, and that well-done documentary done about him, "The Life and Times of Hank Greenberg."