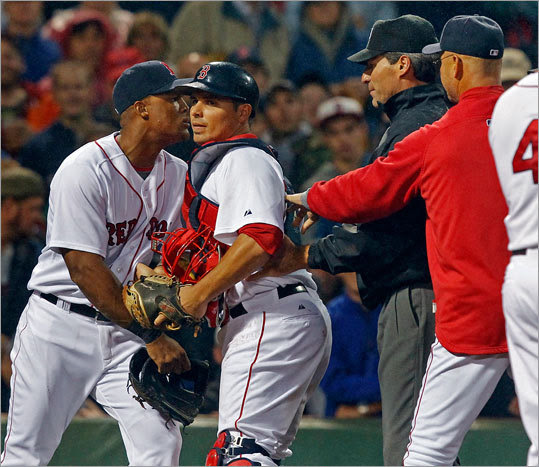 The Red Sox split a doubleheader yesterday with the Seattle Mariners, a 5-3 win in the first game but a 4-2 loss in the nightcap.

Beltre was caught looking at a borderline pitch the previous inning, but walked away and said nothing to the ump. Before the third inning started, Beltre was giving it to Hernandez by the Seattle dugout, and in Spanish as well. But for reasons totally unknown to anyone else on this planet, Bellino threw Beltre out of the game. When Beltre and Terry Francona went to argue their point with Bellino, they were shielded off him by the other umpires (and it was Joe West's crew, what a shock). Tito got tossed shortly after that.

It was a really embarrassing display by a group of inept umpires, which have infested MLB in recent years. Both Kevin Cash and Hernandez backed up Beltre's version of the events, but naturally the umpires didn't bother to get together and try to figure out exactly what transpired. Once again, MLB has a serious problem with rotten umpires, but naturally they will put their heads in the sand and do nothing. Bellino deserves to be suspended.

Josh Beckett pitched six solid innings, and the Red Sox scored four runs in the sixth inning of a scoreless game. Adrian Beltre and Daniel Nava had clutch RBI in the inning. But Beckett gave Seattle three runs back, on HRs by Russell Branyan and Casey Kotchman.

Daniel Bard and Jonathan Papelbon shut the down on the Mariners over the final 2 2/3 innings, with Pap getting his 32nd save.

Tim Wakefield started Game 2 in place of Jon Lester, who was moved back to Friday against Tampa Bay, as Daisuke Matsuzaka has been complaining of a sore back and will not pitch in St. Pete. (Just what the Sox need, more injuries.) Wake wasn't bad, and pitched 5 2/3 innings, allowing four runs.

Hernandez pitched 7 2/3 innings, allowing the Sox two runs in getting the win.

New York and Tampa Bay both lost, so the Red Sox gained a half game yesterday, and now trail both teams by 5 1/2 games.

Here's an interesting article from the Hauls of Shame web site about a Shoeless Joe Jackson jersey from 1919 currently in the Hall of Fame, that was originally in the late Barry Halper's collection. Turns out that it's a fake.

And The Texas Con Man will be arraigned in federal court in Washington on Monday afternoon.
Posted by The Omnipotent Q at 11:33 AM