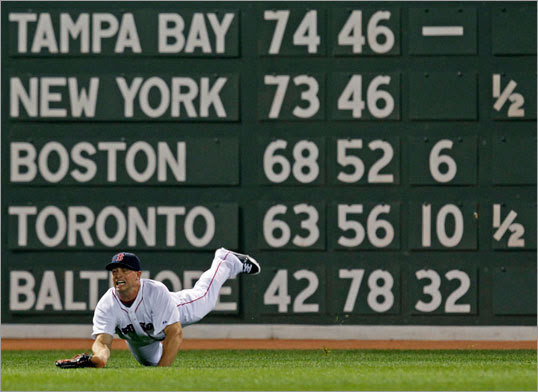 On a night when I picked to see "Inception" with a friend of mine in Brooklyn (a good film, but I think I'd have to watch it again to really appreciate it), the Red Sox came from behind to beat the Anaheim Angels of Los Angeles for the ninth straight time, 7-5.

The Angels still haven't beaten the Red Sox since the infamous Papelbon meltdown of Game 3 of the 2009 ALCS.

I checked my cell just in time to see the Red Sox rallying in the seventh, with Daniel Nava getting hit by a pitch with the bases loaded to bring in tie-breaking run. He also made a great catch in the 8th to keep the two-run lead (pictured).

John Lackey gave up all five runs in seven innings, two home runs, struck out five but walked none. He left with the lead and got the win. Jonathan Papelbon looked like the 2006 closer who lit up the league, striking out the side on 14 pitches in getting his 30th save, and he became the first closer ever to get 30 saves in his first five full seasons in MLB.

New York and Tampa Bay both won, so the Sox keep pace in the East, 5 1/2 games behind both clubs.
Posted by The Omnipotent Q at 11:54 AM