Uncle Jed to the Rescue

No, not this Uncle Jed (pictured left).

Jed Lowrie dropped a popup in foul territory in the 11th inning with two outs playing first base, and how many times have you seen something like that lead to disaster?

Fortunately, Jonathan Papelbon struck the Toronto hitter out, and the game proceeded still tied, 4-4, to the bottom of the 11th. Who led off?

Lowrie. I just had a feeling...

And Jed blasted a pitch from Casey Janssen into the Red Sox bullpen to give the home side a much-needed 5-4 win. And all the more important since New York and Tampa Bay both won yesterday.

It was Lowrie's 7th career home run, and four have come against Toronto. Go figure. 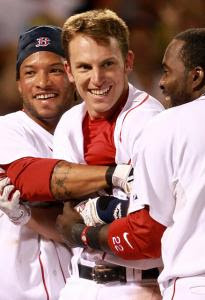 Papelbon got the win, as Daisuke Matsuzaka went eight innings, but had only one bad inning, the sixth, when he gave up a 4-1 lead and the Blue Jays tied it, on yet another home run from Lyle Overbay.

And now, even players who WANT to play for the Red Sox are getting hurt and ending up on the disabled list.

The Pawtucket Red Sox placed Carlos Delgado on the DL after he experienced soreness in his hip and lower back, the hip he's had two surgeries on. He's been out a week, and his chances of making it back to the majors appears to be fading. Here's more from Extra Bases.
Posted by The Omnipotent Q at 11:45 AM