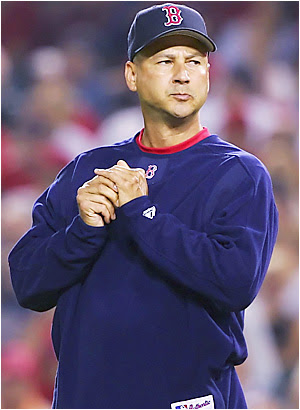 Count me in the group who feels it was a miracle the Red Sox were still in the playoff race until the calendar turns into September.

This was one of Terry Francona's best managing jobs of his career. 19 players went on the DL, the Red Sox had subpar years from Josh Beckett and John Lackey, and a bullpen that was one of the worst in the American League. And on the final weekend of August, the Sox were still very much alive.

But it still irks me that when the conversation of the best MLB managers comes up, the usual suspects (LaRussa, Cox, Torre, Scioscia) come up first, and Tito is usually an afterthought. He did one helluva job this year, and deserves some votes for Manager of the Year, no matter how September concludes for the Sox. (Ron Washington of Texas will probably win it, though.) He is the best Red Sox manager in my lifetime, and once again proved it in 2010. Tito has also taken another step to an eventual election into the Hall of Fame one day.

Losing 2 of the 3 in St. Pete this weekend now leaves the Sox 7 behind New York and Tampa Bay, and it looks like a certainty that the Red Sox won't be playing baseball beyond October 3rd this season. Just 31 games left to play and the schedule just doesn't favor the Sox making a run. Most of the games are on the road, and later next week they have to make a trip to the West Coast.

Well, that's the way it goes, folks. Some years the postseason happens, some years it doesn't. I'm as dedicated a Red Sox fan as there is, but maybe it's time to look forward to 2011.

Roger Clemens Incarceration Day took yet another step forward when the Texas Con Man decided to take on Uncle Sam on his home turf and will not take a plea bargain. He pleaded not guilty in federal court in Washington yesterday, and jury selection for his perjury trial will begin on April 5th.

You know he will be singing this song shortly after that.

On a much better note, Ryan Westmoreland's comeback took another step forward as he will join the Lowell Spinners this week to work out with the team. He won't play, but it is a really heartwarming that just six months ago he had brain surgery and the doctors were unsure he would have normal brain function, and now he is trying to get his baseball career back on track. Just a terrific story. Good luck, Ryan.
Posted by The Omnipotent Q at 11:35 AM