The Trophy's a Hit at Thom's 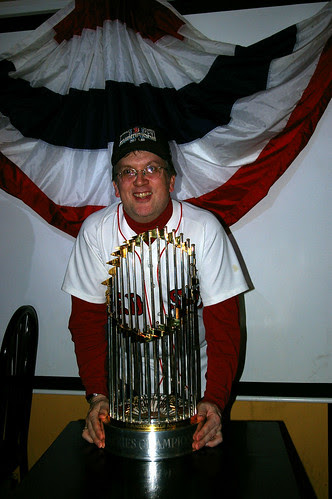 It was a night to remember at Professor Thom's on Friday night as the bar was packed with Red Sox fans (at least 100, probably more) as the 2007 World Series Championship Trophy made an appearance in New York, and it was a huge hit.

The Trophy spent most of the day at three different stops in Connecticut: New Haven, Waterbury and Hartford. The Thom's viewing was scheduled for 7 PM, but the rally in Hartford did not end until after 5 PM, so it looked like it might not happen for a while. (We put on the World Series DVD on the big screens to entertain the fans while they waited.

But fortunately, there wasn't too much traffic coming down from Hartford, and The Trophy got to the bar at about 7:25. There was a huge ovation as my buddy Chris brought the Trophy in, and everyone wanted to touch it as it went by.

The Trophy was put on a table by the back of the bar, right next to the giant video screen. People lined up throughout the bar, and most were acting like little kids on Christmas morning when they had their turn with the Trophy. It was kissed, touched, fondled and held by almost everyone. When it was my first turn (I went up to it a number of times) I had a number of people taking pictures of me, I felt like I was posing with an Academy Award!

It was an incredibly fun night, as everyone had big smiles on their faces, especially after they finished posing with it. More than one person said to me, "I'd love to do this every year!"

There were some comic moments last night as well. The guy who runs the bar next door called Finnerty's is a guy named Keith, who's a big Yankee fan. He came in to check on the festivities, and threatened to spit on the Trophy if he got near it! Actually he enjoyed seeing it, and later in the night came back with a Yankees flag and posed with it, as my buddies Chris and Steve were mockingly beating him up. Keith is a good Yankees fan and treated the whole night with good humor.

And the same could be said of my buddy Mike, who is a Phillies fan. He posed with me and Chris in a "mock photo." Chris and I were "laughing" at him as Mike shrugged his shoulders. And to top off the night, Mike came back with a sign he made up "It's 1980!" and posed with the Trophy with a big smile (as 1980 was the one and only Phillies World Series title). Everyone got a big kick out that.

The Trophy viewing last night went on for over 3 1/2 hours, as it did not depart with its handlers (from the Red Sox front office) until just after 11. The good folks from Bombo Films were on hand also (they were instrumental in getting the Trophy to Thom's) to record some of the festivities for their upcoming documentary they've filmed in the bar during the 2007 season.

I must have posed with the Trophy on five or six different occasions (with some other friends from Thom's and the BLOHARDS), and it was a fantastic night. It was so sweet to be with another Red Sox World Championship Trophy, and again in New York "behind enemy lines." (I'll have more photos to share of the night soon.)

Like some of my pals said last night, "I'd love to do this every year!" And I hope we do.
Posted by The Omnipotent Q at 12:51 PM

Think Of The Boston Red Sox as a virtual 3rd NY Team:

When you take the Underground Green Line Trolleys B, C, Or D Line to Kenmore, think Ebbets Field;

I think of it as the BROOKLYN, I never got to know;

Think of the Red B, as the old White B. I do that @ Fenway Park;

& the Gang in the 4th Degree Emergency Meeting for Next Week's Patriotic Ball, loved the Idea that I brought in an Advertisement for a Great Red Sox Bar called Professor Thom's;

There will be members coming in from Queens to see our Clubhouse in The East Village;

They wished me good luck with seeing & getting pictured with the Trophy.

So, did the Red Sox purposely not advertise this? The press release only mentioned Connecticut. (terribly skipping Fairfield County, of course.)

How are these days?

It came about very quickly, Jere. It was done through Bombo Films, and it wasn't confirmed until Wednesday. But thankfully we got the word out quickly and a big crowd turned out. Thanks for linking the post to Ballhype, Jere...much appreciated.

Doing OK Kaylee, and I hope you are the same.

Yep I am actually doing quite well.I am back in school now at least :)

"It came about very quickly, Jere. It was done through Bombo Films, and it wasn't confirmed until Wednesday. But thankfully we got the word out quickly and a big crowd turned out."

Thanks for the info

All I did was blog about this and link to your site. Anything involving ballhype, I know nothing about. I just went there now and I did a search, and I do see where it says I "found" your post, but that doesn't mean I told them about it, it just means they found your post through my link. Their language is misleading. (But I only know that because all I did was write an entry on my own blog linking to yours....)

I saw and touched and kissed both the '04 and '07 trophies whie they were in hartford. LL was there too...I shook his hand and said a simple "great job...sign "Tek."

Well, thanks for the link anyway, Jere. I guess when you link someone else who has a site connected to BallHype it is "found"...

Way to tell Larry to get Tek and Tito signed, Peter! It is something to see the Trophy up close and touch it. History up close and personal...

Sure. What I am guilty of is putting a link to this in Joy of Sox comments. Right.....now.

While you were fondling the World Series trophy, Aubrey Huff was fondling Melissa Midwest.

That's awesome John! Might we be seeing next year's Christmas card?

It's very possible, Ken. I just wish we could have had the Trophy Viewing in early December...