The Night of The Trophy 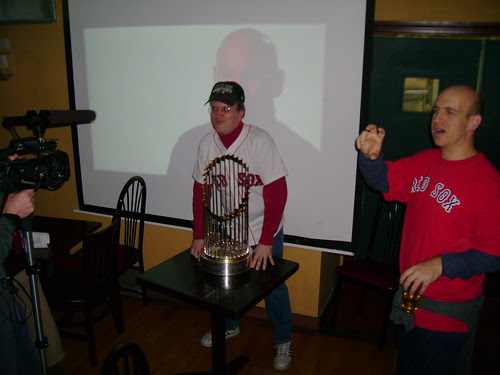 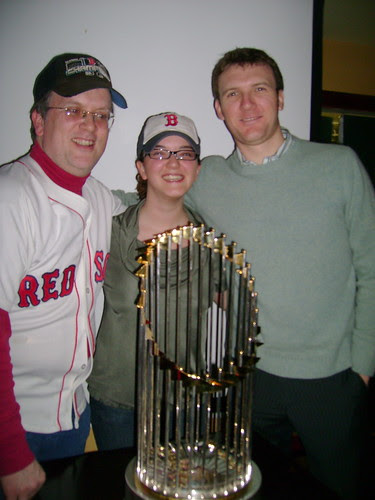 As promised, some more pics from last Friday night, when the Trophy made its Professor Thom's debut.

The above picture is of me, as I'm being filmed by the folks from Bombo Films. On the screen behind me is the 2007 World Series DVD, and a silhouette of Terry Francona. There just seems something rather "ghostly" about it.
On the right is me with my friends Kim and Gareth. Kim took many of the pictures, and I thank her so much for that.
And here is one of my favorite pictures of the night. My pal Chris and I posed with our friend Mike, who is a devout Phillies fan. Mike is shown shrugging his shoulders as Chris and I enjoy a good laugh at his expense. The picture was staged and we all had a good laugh over it. 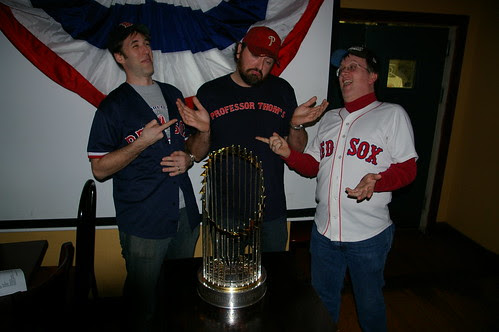 Mike took another great photo later in the night (unfortunately no one sent me a copy of it). He was holding a piece of paper in which he wrote "It's 1980!" while he was smiling behind the Trophy. (It was reference to the year his beloved Phillies won their only World Series championship.)
Many of my friend came with cameras, and it felt like the papparazzi was in the house. Everyone had a great time last Friday night, and even those folks who were present who were not Red Sox fans thought it was a lot of fun. It brought back a lot of special memories from 2004, and I really hope we can all do it again at Thom's next year!
Posted by The Omnipotent Q at 10:32 AM