Hype to Get Drunk By 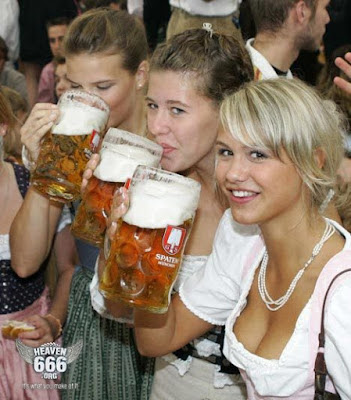 I made a promise to myself to do my best to avoid all the nonsense that goes on with the Super Bowl. There are fourteen days between the conference title games and the Super Bowl, which the NFL is totally to blame for. In poll after poll, the fans, owners, players and everyone else feels that that is FAR too long between games. Everyone but the NFL wants to play the game after one week, but the NFL milks the extra week for every last dollar they can make off it. So the talking heads and other media types really scrape the bottom of the barrel in search of stories.

Today I was switching channels and came across the Mike and the Mad Dog Show (aka "Fatso and Fruit Loops"). As many of you know I detest them both, as Mike Francesa is an obnoxious blowhard and Chris Russo is just a plain blithering idiot. And today, I had the misfortune of stopping at their program, and like a horrible auto wreck, I couldn't help but stop and look for a few moments. God help me, I should have kept going.
Russo actually wasted ten minutes of my life by babbling on about Giants owner Steve Tisch and how "I'm tired of seeing him on the sidelines." Apparently, Giants owners are not permitted to do that in his eyes, and he doesn't want to see that any more. Yep, a psychotic knucklehead on the radio is dictating policy to the Giants' owners, even though the owners on many other teams (like Jerry Jones, Arthur Blank and many others) do that and there's no rule by the NFL that says they can't. Yep, the Super Bowl hype puts stupid shit like this on the radio.
And, if you ever want to have fun while being tortured by the Mike and the Mad Dog program, here's a "drinking" game you can play if you're ever stuck listening to them (and can't get away). Every time either one of them says the words "bottom line" during their show (and they do that dozens of times a show), take a full slug of whatever alcoholic beverage you are enjoying with your friends at the moment. Another would be to take a drink every time Russo says anything incredibly stupid, or when Francesa says something where he's talking down to the audience and pontificating about something he thinks he's the last word on.
You'll be tanked in about 30 minutes. That way, you won't remember the inanities that comes out of the radio after you've collapsed.
Posted by The Omnipotent Q at 6:08 PM

I can just imagine what "The Michael Kay Drinking Game" would be like;