Lying Through His Teeth 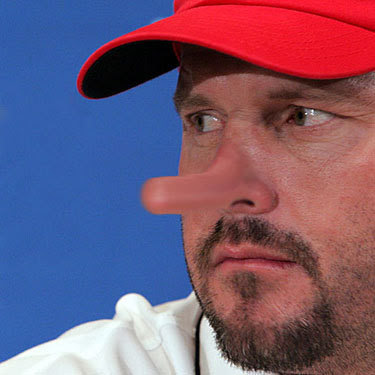 I'm sure many of you out there saw the Roger Clemens interview with his buddy Mike Wallace of "60 Minutes" tonight. This was going to be "must see TV" and there was no way I could miss it.

So having seen it, I start off by saying this:

Roger Clemens is lying through his teeth.

"The Texas Con Man" looked nervous throughout most of it, and he seemed to be looking around at times while giving his answers. I'm no expert on body language, but he sure looked like a guy who wasn't comfortable in the answers he gave.

Most of the answers he gave sounded very unsatisfactory to me. He totally blew off the questions about Andy Pettitte's admission to taking HGH, and danced around the possibility of taking a lie detector test. He didn't come right out and say it, but he basically called Brian McNamee a liar, by saying he was never injected with steroids by him. He said it was Vitamin B-12 and lidocaine that McNamee shot him in the butt with. (Jose Canseco said that "Vitamin B-12" was a euphemism by juicers for taking steroids, and I read in the New York Daily News today that lidocaine is not effective when taken in the butt for injuries to other parts of the body, and only a licensed physician could dole it out.)

I guess the ball is now in McNamee's court about slapping Clemens with a defamation suit. (I would bet it won't happen, even if Clemens gave him the ammo for it.)

When Wallace asked him about why McNamee would lie about him and not Pettitte, and why he would risk federal prison by lying, Clemens had basically no answer for him. Clemens said he was "shocked" by Pettitte's admission, and had "no idea" his pal was taking HGH. (How many of us really believe that?) Clemens seems to paint himself as a victim, saying how he's "guilty until proven innocent." He blames MLB for not letting him answer the charges in the Mitchell Report, and claims he would have answered them "in a heartbeat" if he'd known what was in it ahead of time. (He fails to mention that George Mitchell gave him the opportunity but he didn't take it.)

And I found this statement rather comical from Clemens:
My body never changed. If he's putting that stuff up in my body, if what he's saying which is totally false, if he's doing that to me, I should have a third ear coming out of my forehead. I should be pulling tractors with my teeth.

His body never changed? Has Clemens seen pictures of himself throughout his career?

This was also bizarre:
WALLACE What, hold, what did McNamee gain by lying?
CLEMENS Evidently not going to jail.

No, knucklehead, McNamee had everything to gain by telling the truth. The feds were in the room with McNamee, and if they determined he was lying, he'd face stiff federal charges. Uncle Sam doesn't like being lied to, Roger. Does the name Martha Stewart ring any bells?

Here is the complete transcript of the interview, from the Boston Globe:
http://www.boston.com/sports/baseball/redsox/extras/extra_bases/2008/01/clemens_on_60_m.html

I don't think Clemens did himself any good with this "Q&A" with Mike Wallace. He looks and sounds like a desperate man, a man who has so much to lose and knows it. Mike Lupica in today's NY Daily News may have said it best when he said that Clemens has talked his way right into a date with the US Congress on January 16. Tonight's bit with Wallace should just be the beginning.

A few weeks ago I remember reading from some writer that Red Sox fans are still "obsessed" with Roger Clemens. That writer may very well be correct. Clemens treated the Red Sox fans with pure disrespect over the years, and now he's getting his comuppance.

As Red Sox fans, I have to admit we are enjoying it. Enjoying watching Roger Clemens flush his legacy, and squirm before the entire world.

And wherever he is, I'm sure that the late columnist Will McDonough, who gave Clemens the nickname "Texas Con Man," is having a good laugh right now. May God rest his soul.
Posted by The Omnipotent Q at 10:11 PM