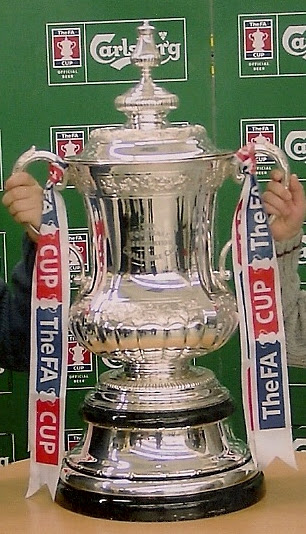 I've been a fan of English soccer for about 30 years, and every year there is a tournament in England called The F.A. Cup (pictured). It is an open tournament among England's professional, semi-pro and amateur clubs. There are 92 clubs in England's four major divisions, and they all compete for the cup. The championship game is played every May at Wembley Stadium.

But hundreds of teams outside the Football League compete for it as well. There are many preliminary rounds before the opening rounds begin in November. (This year a record number, 731, are playing for soccer's most prestigious national trophy.)

The fourth round takes place this weekend, and there are 32 teams still alive. The majority still in are from England's top two divisions: the Premiership and the Championship. But there are a handful of clubs still alive outside of those divisions. And right now, there is just one "non-league" club left: a team from Hampshire called Havant and Waterlooville.

And this Saturday, they play one of the true giants of English soccer, and the team I am a fan of: Liverpool FC. (Think the Giants are an underdog against the Patriots in this year's Super Bowl? That's nothing compared to what the boys from Hampshire are up against.)

H&W are currently in non-league division called Conference South, with is roughly equivalent of the Sixth Division. In other words, if you lined up all the teams in England, they would be roughly ranked around 125. (Liverpool is currently in fifth place in the Premiership.) For H&W, the matchup will be a blessing, as it will give the club an incredible economic boost, as the match will be played at Liverpool's legendary Anfield. But in terms of the match, it appears to be a complete and utter mismatch.

And as a Liverpool fan, I'd be worried about these guys.

The two clubs are on opposite ends of the British soccer spectrum. The H&W players are basically part-time players, who have regular jobs besides playing soccer. Whereas Liverpool is one of the glamour teams of not only English but world soccer. They have million dollar players from around the globe playing for them. H&W have had a magical run in getting to the Fourth Round, defeating two League teams (Notts County and Swansea) in getting the matchup with Liverpool. This is their one chance to play on the national stage.

So H&W have nothing to lose at all. If they lose by ten goals it will not be anything to be ashamed of. They will return to their anonymous lives as non-league players. But if they walk into Anfield and upset Liverpool...

The F.A. Cup really has no equivalent in American team sports. But this matchup does bring two possible American similarities. I think of the Red Sox annual spring training matchup against Boston College as a close equivalent, but there is nothing on the line for either team, just a tuneup match as the Sox start a new year.

I guess a better one would be the U.S. Olympic hockey team's game with the Soviet Union in 1980 at Lake Placid. Like this one, it was basically a "pros vs. amateurs" affair, and no one gave the Americans a chance against the big, bad Russians. But we all know how that turned out. It was a case of underestimating your opponents, and an amazing upset happened.

More info on the F.A. Cup: http://www.thefa.com/TheFACup/TheFACup/Archive/
And more on H&W: http://en.wikipedia.org/wiki/Havant_&_Waterlooville
Posted by The Omnipotent Q at 12:40 PM

Damn, Q. I really had no idea that that was how the FA worked. I thought it was only drawn from Division 1 and 2. I'd love to see that game!

And all the teams are drawn by lot to play each other through the semifinals.

I'd love to see that game too, but I'll see the highlights on Fox Soccer Channel.

I would be just as big in England as the US hockey win in 1980 was. H&V are the lowest ranked team to ever reach the Fourth Round...the pressure's on Liverpool this Saturday...