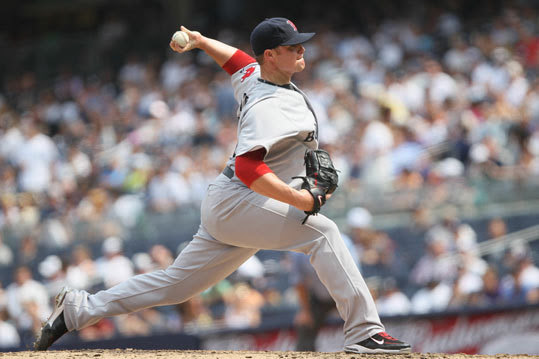 The Red Sox got a split of the four-game series with New York this weekend (plus Monday), and remain 6 games back, exactly where they were going into last Friday's game.

Sunday night was just a bad game all around, as Josh Beckett got whacked by New York, lasting just into the fifth inning, while the offense simply didn't show up against some scrub pitcher named Dustin Moseley. (Wasn't he the guy chasing Robert DeNiro in "Midnight Run?") They got just two runs in a rather disheartening 7-2 loss.

They needed a win on Monday to get the split, and they did it the hard way. The Sox got two runs off Phil Hughes in the second inning, and that was it. They managed five hits in the first two frames, and just one the rest of the game. Jacoby Ellsbury had a big game on the basepaths, as he went 1-for-2 but stole four bases, tying Jerry Remy's 1980 record for steals in one game.

But Jon Lester was terrific, bouncing back from two straight lousy starts and an 0-4 record since the All-Star break. He didn't allow his first hit until the fifth, and left the game in the 7th inning with the bases loaded and one out. NY had them loaded with none out (Marcus Thames missed a two-run homer by a few inches), but Daniel Bard struck out Derek Jeter and Nick Swisher to keep them off the board (on six pitches, too).

Bard gave up a home run to Mark Teixeira to start the 8th, and he put two more on with two out, but Jonathan Papelbon got the final out with one pitch. Paplebon allowed a walk to Capt. Intangibles in the 9th with one out, but he struck out the other three hitters he faced, including Teixeira to end it and get his 28th save.

It was a nailbiter to the finish, but an extremely huge win for the Red Sox. Tampa Bay won in Detroit, so they still trail the Rays in the Wild Card by 4 1/2 games.

The road for the Sox actually gets a little tougher, as they take on a hot Blue Jays team in Toronto tomorrow night for three, and then to Texas for three to wrap up the trip, and that place is never a picnic for them.
Posted by The Omnipotent Q at 10:59 PM

Nothing trival about that win. Let's get off this road trip in decent shape and make some hay on the next home stand.