Another Step to the Cy Young 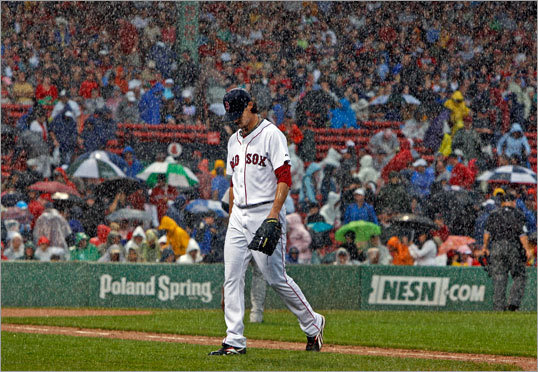 Despite 2 3/4 hours worth of rain delays at Fenway on Sunday, the Red Sox gained a much-needed 5-0 win and took the weekend series from the Toronto Blue Jays.

A very rare sight was seen by those Fenway denizens: a David Ortiz triple, and it broke up Shaun Marcum's perfect game bid in the 5th inning. It was Papi's first three-bagger in over a year, and Adrian Beltre hit the next pitch for a double to give the Sox the lead.

Bill Hall later in the inning hit a majestic blast across Lansdowne Street to make it 3-0, and it was his 17th home run of the season. It was all Clay Buchholz needed, as he went six shutout innings. He did have trouble in three different innings, but got out of all of them unscathed.

Daniel Bard and Felix Doubront finished up, with Doubront picking up his second save of the season. Buchholz picked up his 15th win, and lowered his league-leading ERA to 2.26. Buchholz is definitely at or near the top of the Cy Young Award race, and has a 20-inning scoreless streak going right now.

New York and Tampa Bay both won, so the Red Sox continue to be 6 1/2 back in the East and 5 1/2 back in the Wild Card chase. John Lackey takes on Doug Fister tonight as the Red Sox open a three-game series at Fenway with the Seattle Mariners.
Posted by The Omnipotent Q at 10:28 AM