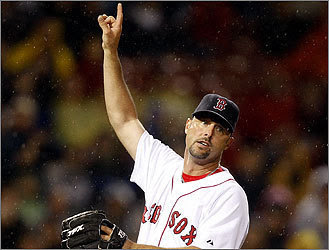 The conditions at Fenway were simply abominable last night, with heavy rain falling for most of the game. But both the Red Sox and Blue Jays needed to play, as the idea of back-to-back doubleheaders this weekend was simply out of the question.

So the Red Sox gave the ball to Tim Wakefield, who was shelled in Texas last Saturday, in his worst start of his Red Sox career. Last night was simply one of his best.

Wake had the knuckler dancing all night, befuddling a hot Toronto club, who came in having won 11 of their last 12. All they could manage against him was three hits, two of them doubles. Wake struck out four and issued no walks. He retired the last 13 hitters he faced before giving way to Manny Delcarmen.

It was something the Red Sox needed desperately, to give the bullpen a night off with the doubleheader today. The Red Sox scored a run in the first on Jed Lowrie's sacrifice fly. Lowrie doubled in another run in his next at-bat, and David Ortiz doubled in two in the seventh to make it 4-0.

The scoring was capped off in the eighth but no less than Kevin Cash, who hit his third home run of the season with two on to make it a 7-0 final. (All three of his homers have been bombs as well.)

The Rays were rained out in New York (as were five other games last night), so the Red Sox are now 2 back of them. Tampa Bay will play a twinbaill today, as will the Minnesota Twins, who were rained out in Baltimore. The Sox' Wild Card lead is now at 6 games, and their magic number for a playoff berth is 11.

Also yesterday, MLB determined by coin flip that should the Red Sox and Rays need a one-game playoff for the AL East title, it will be played at Fenway. It is highly unlikely, as the Wild Card winner (that would be the Twins in this case) would have to have a better record than both the Sox and Rays. If the Red Sox and Twins are tied for the Wild Card, a one-game playoff would also be played at Fenway. Again, not very likely.
Posted by The Omnipotent Q at 10:40 AM

You are NOT alone and Neither Am I. Roger Kahn of "The Boys Of Summer", has also called the Current Yankee Stadium, a 32 Year Old Ballpark:

He's not buying the Hype-Neither am I, and neither are you.