Enough Already. Send in the Bulldozers.

It was a lovefest last night as the final game was played at the second Yankee Stadium. Lots of hoopla and memories, as no one wanted to reflect on the dismal cast that currently makes up the 2008 squad. A few thoughts about it.

First of all, I keep hearing this "85-year history of Yankee Stadium." This is wrong on two counts. There were TWO Yankee Stadiums. The first one was there for 51 seasons, from 1923-1973. Then there was two years there was NO Yankee Stadium in 1974 and 1975. Then, the SECOND Yankee Stadium was in operation from 1976-2008. That was 33 seasons. So, without a calculator, that adds up to 84 seasons, or a total of 83 years. I guess people conveniently forget how the Mets and Shea Stadium came to their rescue in 1974 so they could tear down their first park and put up a brand new one and let the Yankees play there.

Babe Ruth, Lou Gehrig, Joe DiMaggio and Mickey Mantle DID NOT play in this second Yankee Stadium. They played in the first one.

Funny how there was no mention of Roger Clemens at any point last night, or George Steinbrenner's two suspensions from baseball.

And as we close out Yankee Stadium II, a photo of the greatest moment in the building's history: 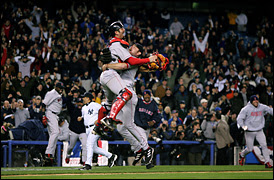 Funny how it was mysteriously overlooked last night.

On September 30th, 1973, I was at the Last Game in Stadium I. The Announced Attendance was Approximately 32K+:

Marvin Lane, RF for The Detroit Tigers, hit the Last Visiting Home Run in the Top of the 7th Inning, off Fritz Peterson, better known for the Wife-Swap with Mike Kekich;

Duke Sims hit the Last Ever Home Run in the Bottom of the 7th Inning. The Yankees lost 8-5;

The Original was the Real and Historical Yankee Stadium. This One, having hosted its' last game, barring anything unforeseen, such as Bud the Used Car Salesman, giving the Yankees a Division of 1, to add them to Post-Season(LOL). This Edition, called Stadium II, was a 1970s' Baseball Stadium, was so very-different from the Original Stadium;

BUT, it's Marketing that sold people one the Idea of One, Continuous Yankee Stadium, on the Site. Many Yankee Fans had no Idea that Yankee Games were played in Good Old Shea Stadium in 1974 and 1975, where, BTW, "The Modern Rivalry" with The Red Sox, was born;

If You Tell A lie, Often Enough, The Populi Will Believe You;

But, never fool a dude from Brooklyn, who was 8 1/2 Months Old when the Brooklyn Dodgers beat The Big, Bad Yankees in 1955;

The Truth Must Be Told-The Yankees have no rings LATELY;

AND the 1970s Stadium II is History, with most of those fans up there last night, only joining up in 1996, with the rest coming in 1998. Sadly, many of them came from the 1986 Mets Fans of The Prior Era, as I've heard many of that Prior Era Group of Fans show up, as Ignorant of Mets History, as they are as Yankee Fans;

AND, at Age 15, as a High School Sportswriter, who was neither Joe Trimble or Dick Young, I had Press Credentials, in a May, 1970 Game vs The Milwaukee Brewers, in Stadium I:

Not bad for a Red Sox Fan, who was a 1st Generation Mets Fan, who can say he wrote about The Original Yankee Stadium and can make comparisons about Stadium I and Stadium II!