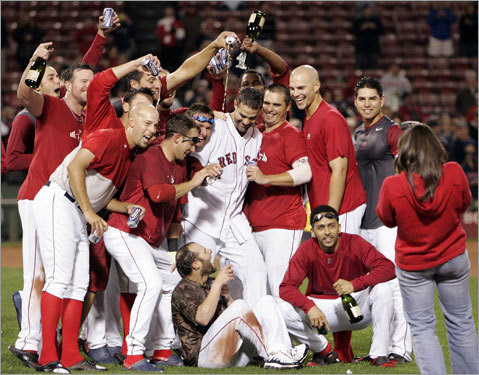 The Red Sox officially stamped their ticket last night to their fifth postseason berth in the last six years with a gritty 5-4 win over the Cleveland Indians at Fenway.

It was a hard-fought win and one of the more tension-filled games of 2008. 22-game winner and probable Cy Young Award winner Cliff Lee was going for the Indians. The Sox got to him in the fourth, as David Ortiz hit a monster double off the "Giant Glass" sign in dead center, and Kevin Youkilis followed it with a moonshot into the Monster seats to make it 2-0.

Tim Wakefield pitched four solid innings, but the defense betrayed him in the fifth as Cleveland scored four times. Sean Casey missed a grounder at first it looked like he should have grabbed. Kevin Youkilis mishandled a ball at third that looked like could have been an inning-ending DP with the score at 2-1. And Coco Crisp just missed making a sliding catch that would have kept the game at 3-2.

But all was forgiven as the Red Sox scored three in the bottom of the inning to put the Red Sox back on top, 5-4. It was capped by Jason Bay's seeing-eye single that gave the Sox the lead. Wakefield pitched six innings, and then the pen took over.

Hideki Okajima got the final out in the seventh, as he was called in with the base loaded. And Jonathan Papelbon did the same thing in the eighth, as Jamey Carroll grounded out on the first pitch to keep the Sox ahead.

Pap got the Indians 1-2-3 in the ninth for his 41st save, as Victor Martinez popped up to Alex Cora to put the Red Sox into a position to be World Series champions in back-to-back years for the first time since 1916. The Red Sox also became the first team to clinch a postseason spot by beating a 20-game winner since 1975. (It was also just Lee's third loss of the year.)

The Red Sox loss officially eliminates the Yankees, who have now gone eight consecutive years without winning a World Series. (You have to wonder if Brian Cashman will take the fall for all of this.)

Now we can officially concentrate on the playoffs, as I was reluctant to with the Yankees still having a faint pulse. (Call it my "Yankee paranoia" from the distant past rearing its ugly head for a brief time. But I should have known better. It's a new era.)

Tampa Bay won a doubleheader in Baltimore last night, so it looks like the Rays will win the AL East. They are three games up on the Sox with 5 games to play. So be it. The Red Sox will probably going to Anaheim to open the ALDS against the Angels, either on Wednesday or Thursday of next week.

Nice job, guys. Now I can relax a bit. Bring on the postseason.
Posted by The Omnipotent Q at 11:22 AM

BTW, The Big Fat Idiot And Clueless Putz, Omar "I Did It MYSELF" Minaya, was signed to a 4 Year Extension by "Sterling" Mets LP:

NEVER Addressed The Bullpen. He Did Jeffy's Bidding.

The Mets will regret that move. I'd bet my life on it.

WHY?? Omar has wrecked two teams. The Expos on their slow march out of Canada and now the Mets.

There is no hope. Omar should be in the same unemployment line as Matt Millen.

Convicts could consider watching the Mets bullpen time served. It's that bad.

Q-a return to Grant's Tomb anyone??

"Fred's Ravine" is for $iti Field.