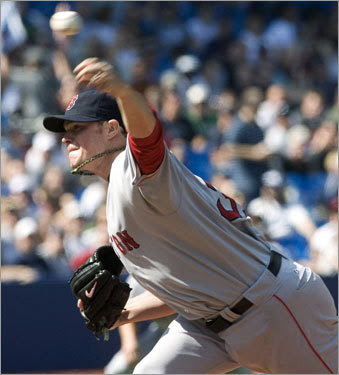 So what's with Jon Lester and the SkyDome, er, the Rogers Centre?

For the second straight time north of the border, he got knocked around early by the Blue Jays, giving up five runs in the first two innings. He did settle down as the Red Sox got back in the game, but Toronto held on for a 6-3 win. Lester dominated the Blue Jays at Fenway last Sunday, giving up just a run and four hits in eight innings to get his last win.

Lester got hammered last August and couldn't get out of the third inning in a 11-0 loss. But he held the Jays in check as the Sox scored three runs off Roy Halladay yesterday, on an RBI single by David Ortiz and Jason Bay's 9th home run with the Red Sox. It was also hit on the native Canadian's 30th birthday.

The Red Sox had other chances to score runs, but came up empty. They loaded the bases in the fifth with two outs, but Jed Lowrie struck out. And Alex Cora bounced back to the mound with two on and two out in the eighth.

The Red Sox magic number continues to be 2 (over New York), and 1 over Minnesota and Toronto. A Red Sox win and a Yankee loss tonight to the Orioles would give the Red Sox a playoff berth. Tampa Bay wrapped up their first ever trip to the postseason with a 7-2 win over Minnesota. The Red Sox now trail them for the division lead by 2 1/2 games.

Daisuke Matsuzaka takes the mound today in search of his 18th win against Jays' rookie Scott Richmond in the Red Sox' final road game of the regular season.
Posted by The Omnipotent Q at 11:24 AM