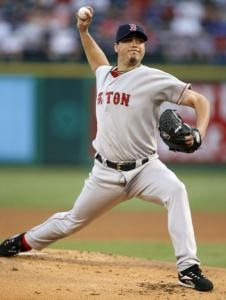 I missed most of last night's Red Sox game in Texas, as I was at the Brooklyn Cyclones game in Coney Island. (The Cyclones lost to Aberdeen and were officially eliminated from the New York-Penn League wild card race, 5-3 in 11 innings.) I did follow the game on my cell phone (via ESPN MVP, a really cool service. Thanks, Dave.)

Every time I checked my phone, the Red Sox were scoring runs. Mike Lowell made a tremendous return to the lineup, after missing a few weeks with various injuries. He homered in his first at-bat, and went on to get three hits and drive in four runs. Coco Crisp had three hits, and had back-to-back triples with Jacoby Ellsbury as the Red Sox were putting the game away.

But most encouraging was the return also of Josh Beckett, who did not allow a run in five innings. He struck out seven, walked none and allowed just four hits. The bullpen took over from there and allowed just a single run with two outs in the ninth.

The Red Sox are surging at just the right time. They are getting their injured players healthy (Sean Casey was also activated last night) and are gaining ground on stumbling Tampa Bay, as they lost again, this time to Toronto, 6-4. Minnesota beat Detroit handily, 10-2, so the Red Sox are now 2 1/2 behind the Rays, but still 5 1/2 up on the Twins.

And oh yeah, the Yankees were nearly no-hit in Seattle last night as Brandon Morrow, in his first MLB start after being a reliever, went 7 2/3 no-hit innings before allowing an RBI double. The Mariners still won, 3-1.
Posted by The Omnipotent Q at 10:31 AM