Not a Bang But a Whimper 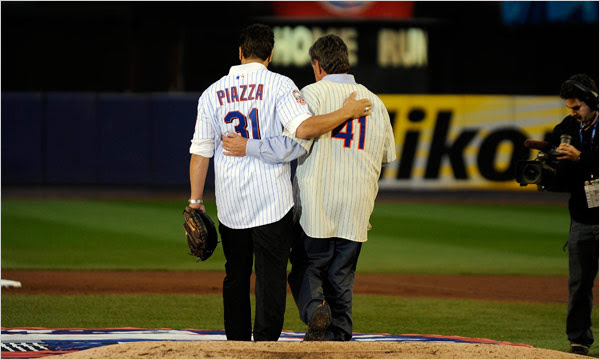 For the second straight season, the New York Mets came up short at the finish line, as the Florida Marlins beat the Mets, 4-2 on the last day of the season, to deny the Mets any chance of gaining a postseason berth. Milwaukee defeated the Chicago Cubs and their win gave them the Wild Card.

It is simply inexcusable. Those at the top must be held accountable for this second straight disaster, a truly awful embarrassment to a proud franchise. A 3 1/2 game lead with 17 to play goes down the drain. Omar Minaya should be unemployed this morning, as he was the architect of this abomination. But instead, the clueless ownership will reward this moron with a new four-year deal. (Minaya is buddies with Tony Bernazard, player personnel director who is tight with the Wilpons. He's also the guy who got Willie Randolph fired. So that's why Minaya has nothing to worry about today.) It is simply unfathomable that he put together two straight flops in the home stretch and he gets to return in 2009.

I don't want to hear about injuries. The Red Sox and Rays have had as many key injuries as the Mets and both found ways to overcome them and finish strong. The losing culture that surrounds the Mets MUST be changed. But the man most responsible for the mess the Mets are now can't be at the head of it.

Jerry Manuel did a fine job as manager, going 55-38 as interim boss. It sounds like he will be back. I really can't argue he should be fired, as he brought stability to the Mets when Randolph was fired.

How to fix the Mets? I really think the Mets need some gamers, guys who've proven they can play under pressure and not fold. The current bunch are wearing the "choker" tag for the second straight year, and the Mets need to make as many changes as possible to improve the club. Moving into a new stadium, they need a fresh start.

But with a Clueless Putz as GM, I'm not optimistic about this team in the short run. The Mets also need some young blood as well. They must follow the Red Sox model and rebuild their farm system.

And blow up the bullpen. As soon as possible.

The closing ceremonies after the game were nicely done. (Although I saw people leaving the park before the ceremonies started. Where were they going?) Mets stars of the past were introduced coming out of both bullpens. Old favorites like Jerry Koosman, Keith Hernandez, Mike Piazza, Ed Charles, Yogi Berra, Willie Mays and Tom Seaver walked out to huge ovations. They stood in lines along both foul lines and each walked up and touched home plate. Then at the end, Seaver threw out the last pitch to Piazza and both walked across the field to the centerfield gates, where they closed them together to bring the Shea Stadium to an official close.

It was a sad ending, both at the final game and the closing ceremonies. The Mets had New York City in the palm of their hands the last few weeks, and blew another golden opportunity to make the Yankees the other team in town.

My deepest sympathies to all those loyal Mets fans I know. They deserve better than this.
Posted by The Omnipotent Q at 10:21 AM