Lester Shines Getting His 16th 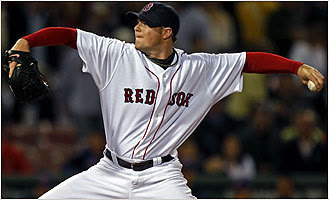 Jon Lester pitched six solid innings last night as the Red Sox took three out of four from the Indians with a 6-1 win at Fenway.

It was Lester's 16th win and he once again flirted with a no-hitter, as he carried it into the sixth inning. Josh Barfield broke it up with a double, and I would bet deep down Terry Francona was glad it was gone, as he certainly would not want his prize lefty going deep into the game on a chilly night with little at stake as far as the playoffs went. Lester gave up a single to Jamey Carroll to break up the shutout.

Francona turned the game over to his pen, and they were excellent, allowing no hits the rest of the way. The Sox got three runs in the first off Jeremy Sowers, and Kevin Youkilis hit a home run to ice the win at 6-1.

The Rays loss in Detroit yesterday means that the Red Sox division title hopes are still alive, but barely. Their magic number is 1, so the next Rays win (or Red Sox loss) gives them the title. A Red Sox-Angels matchup looks very likely, and the only thing to be determined about that is which date it will begin. The Angels have the option of beginning it on Wednesday or Thursday night (rumor has it they are leaning towards starting on Wednesday), as they have the best record in the league. If they do choose Wednesday, the Red Sox may use a three-man rotation in the ALDS (Beckett, Lester and Matsuzaka), and may carry just 10 pitchers in the first round.

The Red Sox will officially retire Johnny Pesky's number tonight, weather permitting. Dustin Pedroia goes for the batting title this weekend, and is currently five points behind Joe Mauer. And oh yes, the Yankees are in town for the final three games of the season, with their golf clubs in tow.
Posted by The Omnipotent Q at 1:46 PM

Ceremony Moved To Sunday, according to WBZTV.COM

Sounds like the weather won't cooperate tonight, so that maybe a smart move.