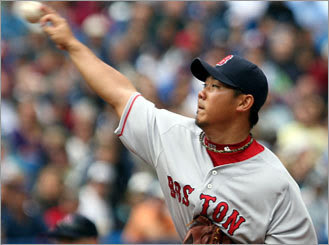 Daisuke Matsuzaka pitched an absolutely tremendous game for the Red Sox yesterday, going seven strong innings in the Sox' 3-0 win over the Blue Jays in Toronto.

Dice-K struck out six, walked two and allowed just two hits. He had trouble only once, in the second, when the Jays had runners on first and third and one out. He struck out the next two hitters to get out of it, and went on to get his 18th victory of the year against just two losses.

Hideki Okajima pitched a 1-2-3 eighth, and Jonathan Papelbon pitched a strong ninth, allowing just a single with two outs. It was his 40th save of 2008. It felt a like a game right out of 2007.

Jacoby Ellsbury had three hits, a triple and two doubles. His triple opened the game and he scored on Dustin Pedroia's sacrifice fly. It was all the Red Sox needed. David Ortiz hit an opposite field two-run shot in third for his 22nd homer of the season.

The Red Sox magic number dropped to one, and a win tonight over Cleveland puts the Red Sox in the playoffs officially for the fifth time in six years. Tampa Bay lost to Minnesota yesterday, 4-1, so the Red Sox are still very much alive for the division title, and are currently 1 1/2 back. The Red Sox win on Sunday eliminated the Twins from the Wild Card, and Toronto from the playoffs altogether. Tampa Bay opens a four-game series in Baltimore tonight, as Josh Beckett takes the mound against the Indians at Fenway.
Posted by The Omnipotent Q at 10:46 AM

Hey..Daisuke was masterful..I've always said if he has his control, he will dazzle. Yesterday, HE DID! BIGTIME.

One more...and you're right..the Rays are vulnerable. It's SO fun...see ya, John.

It should be an interesting week, Peter. Take it easy...