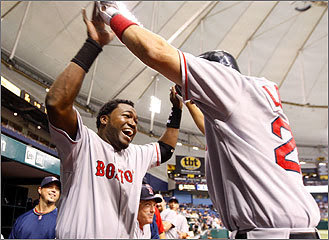 The Red Sox rolled out the heavy artillery at the Trop last night against the Rays, and they let loose six home runs, four against so-called Red Sox killer Scott Kazmir, and they strolled to an easy 13-5 win, and are now just percentage points out of first place.

From the start Kazmir wasn't right. His first pitch was way off the plate to Coco Crisp and went to the backstop. I immediately thought of Ricky Vaughn from "Major League" and Bob Uecker proclaiming, "Just a bit outside." But Kazmir REALLY did look like Wild Thing, as his first nine pitches were balls.

When he did challenge David Ortiz, Papi made him pay and he launched the first of many bombs on the night into the rightfield seats to make it 3-0. And two batters later, Mike Lowell hit another shot to left to make it 4-0.

It would be all Daisuke Matsuzaka needed. He didn't look very sharp either, as he went 5 innings, threw 101 pitches, but it was good enough as the Sox had such a large lead. He seemed to be going 3 and 2 on every Rays hitter, so the pitches were mounting.

The game took a really ridiculous turn in the third when Jason Varitek got hit with a Kazmir pitch, and ump Jerry Meals (who called an awful game behind home plate) decided to warn both teams about it. It was clear that Kazmir had no command at all and it wasn't intentional. But that didn't stop him warning both teams. (Two players did get hit later in the game, one from each team, but no one was tossed.)

Kazmir also gave up homers to Varitek and Jason Bay. (Tek's homer set a new franchise record for a catcher, as he broke Pudge Fisk's mark of 155.) All four homers he gave up were moonshots. He gave up 9 earned runs before he was pulled with no outs in the fourth. Jacoby Ellsbury and Kevin Youkilis hit home runs after he departed. When the score was 11-1, Joe Maddon of the Rays raised the white flag and emptied his bench in the fifth. When Don Orsillo on NESN pointed out the game took the feel of a spring training game with all the bench guys in, Jerry Remy had a great line: "It's appropriate. We are in Florida."

After Dice-K left with the score 13-1, Chris Smith gave up two two-run homers to make the score a final 13-5. Mike Timlin pitched a scoreless eighth, and set a new MLB record with his 1,051st appearance as a righthanded reliever.

BTW, this game was unbelievably NOT a sellout. Just over 29,000 fans were in the Trop last night, and you could see some empty seats. What does it take for the Tampa fans to sellout a game? The Rays are playing the most important series in their history, for first place in mid-September. And there was still a large amount of Red Sox Nation present. Are they still that apathetic about this exciting club? If they are, the Tampa Bay area doesn't deserve a team, and Rays management has every right to pull up stakes and move elsewhere.

The Rays are in first today by the slimmest of margins, .002 points ahead of the Red Sox (Tampa Bay has two games in hand). The Red Sox magic number is now 6 for clinching a playoff berth, as Minnesota lost in Cleveland.

Josh Beckett takes the ball tonight against Andy Sonnanstine as the Red Sox attempt to get first place all by themselves in the AL East.
Posted by The Omnipotent Q at 10:38 AM