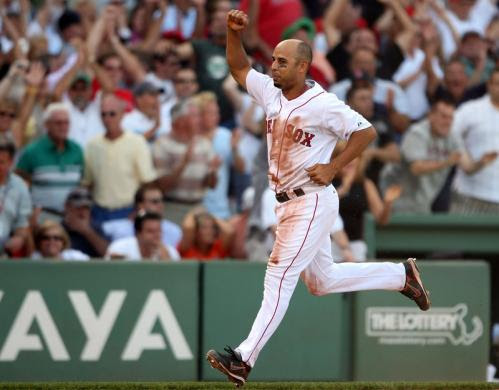 For a good part of Wednesday afternoon, it looked like the Red Sox were sleepwalking to what would be an inevitable loss to end the homestand against the last-place Orioles. The bats were silent, only three hits through the first six innings. Daisuke Matsuzaka didn't have it, as he gave up three earned runs and four walks in six innings.

It was 4-0 Orioles after six, and they even scratched scheduled starter Jeremy Guthrie because of injury. They went with reliever Lance Cormier, and it looked like the Sox would continue the hitting barrage from the previous night. But they did nothing to Cormier, who pitched three shutout innings. Dennis Sarfate came on and also pitched three shutout innings. It looked like the Sox just couldn't wait to get on the plane to Texas.

But it all changed in the seventh, as Dustin Pedroia, the hottest hitter on Planet Earth, hit his 17th homer of the year, and they added another run to make it 4-2. In the top of the eighth, Alex Cora made a great play on an infield grounder to throw out Aubrey Huff at third to keep the Red Sox just two down. In the bottom of the inning, Mark Kotsay drove in two runs with a triple off the left-centerfield wall to tie it at 4. (It was Kotsay's 7th RBI in six games with the Red Sox.)

The game remained tied in the ninth when Cora led off with a single. Coco Crisp put down a bunt that looked to be going foul but it stayed fair and he had a bunt single. Jacoby Ellsbury also laid down a bunt, but O's pitcher Jim Miller fielded it and would have had Cora at third with a good throw, but instead threw the ball into leftfield and Cora scampered home (pictured) to give the Sox a thrilling, come-from-behind win, 5-4, and a sweep of the series. Cora touching home was the first time the Red Sox had the lead all afternoon. (And it was the second time this week a game ended with a bad throw by the pitcher trying to get a runner out at third on a bunt. Joe Nathan did something similar in a Twins loss earlier this week in Oakland.)

It was also the day the Red Sox tied the MLB record for consecutive sellouts with 455, that was set by the Cleveland Indians at Jacobs Field from 1995-2001. The record will fall on Monday night when the Tampa Bay Rays open the big series at the Fens.

Speaking of said Rays, they dropped another last night, 8-4, to move the Red Sox within 3 of the AL East. Minnesota was beaten in extra innings in Toronto, 5-4. So now, the Red Sox have a five-game lead in the Wild Card. So now it's time to begin the countdown to the playoffs. On the side of this site I will have the Red Sox "Magic Number to October" and will change every time the Sox win and the Twins (or whoever is right behind them) loses. It was fun to do last season, and so let's have some more fun this year, too.
Posted by The Omnipotent Q at 11:09 AM

It's going to be great fun seeing this stretch run. Pedroia for MVP!