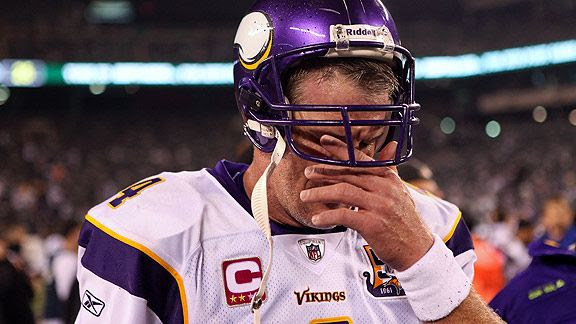 The Minnesota Vikings sure didn't look like a team that's going to the playoffs this season, with an awful performance that they gave last night, a 29-20 loss to the Jets at the New Meadowlands Stadium.

Dumb penalties, lousy special teams play and an offense that looked anemic until late in the third quarter didn't boost my confidence in this club. It rained for most of the contest (it was delayed 35 minutes because of lightning) but that's no excuse, as the Jets had to play in the same conditions, too.

Brett Favre may have reached two milestones last night: his 500th career TD (and 501 after that) and a total of 70,000 career passing yards. But most Vikes fans will remember the interception he threw in the final two minutes to Dwight Lowery, who ran it back for a TD, to ice the game.

Favre's 500th TD was his first to Randy Moss, who caught four passes in his Vikings' return. Favre's elbow was clearly bothering him, especially in the second half. He claims it's no big deal. And for a team that just came off an off-week, they looked terribly flat out of the gate last night, on both sides of the ball. The defense kept the Vikings in game, shutting the Jets offense down and forcing them to kick five field goals.

Right now, the NFC is wide-open, with no one dominating. But the Vikings have a murderous schedule the next six weeks: Dallas, Green Bay twice, New England, Arizona and Chicago. No easy weeks any time soon. I could easily see them 3-7 or 4-6 by the time they finish Game 10.

Count me in the group that's not terribly optimistic about this Vikings team. Cue Jim Mora:

Prove me and Jim wrong, guys.
Posted by The Omnipotent Q at 11:28 AM