A Bad Day In South Bend 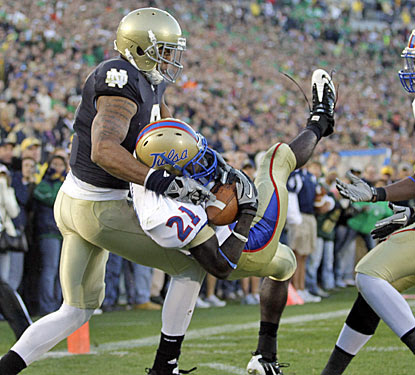 The University of Tulsa, not exactly one of your college football powerhouses, stunned Notre Dame today with a 28-27 win.

A moment of silence was observed before the game for Declan Sullivan, the Notre Dame student who was killed last Wednesday when the tower he was filming practice on collapsed and he fell to the ground. (A classy move by Tulsa to have all their players wear a "DS" in a shamrock, as did all the Irish players.)

Dayne Crist was hurt in the first quarter on a hit by a Tulsa defender after running 28 yards for a first down. And the news was really bad when it was learned he ruptured a patella tendon in his left knee and is lost for the season. He joins a cast of injured offensive players, like Armando Allen and Kyle Rudolph.

Freshman backup QB Tommy Rees came in and did an admirable job. He threw four TDS, but was picked off three TDs. It was a big day for Michael Floyd, who caught 11 passes and 2 TDs from Rees.

The third interception proved the costliest, as it was in the end zone with 36 seconds left (pictured). ND was in field goal range at the Tulsa 19.

It was the biggest win in Tulsa's football history and their first win ever over a BCS school.

And if that isn't depressing enough, Notre Dame takes on #8 ranked Utah at South Bend in two weeks. The Irish are now 4-5 on the season.

It's still a long way back, folks.
Posted by The Omnipotent Q at 9:32 PM