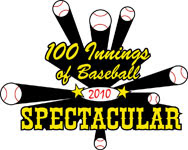 A very long baseball game was played this past weekend. No, it wasn't an ALDS game, but a 100-inning game that benefited ALS and the Walter Bentson Scholarship Fund.

It was the 7th annual game, and for the first time, it ended in the final at-bat, with a final score of 73-72, in favor of the Early Bird team over The Worm. The players were amateur players from the Boston area. Curt Schilling began the charity game in 2004, and was one of the team managers this year. The game, played at Adams Field in Quincy, MA, lasted over 33 hours and has so far raised over $10,000.

You can still donate to this very worthy cause by going here. Nice job by everyone involved!
Posted by The Omnipotent Q at 3:54 PM