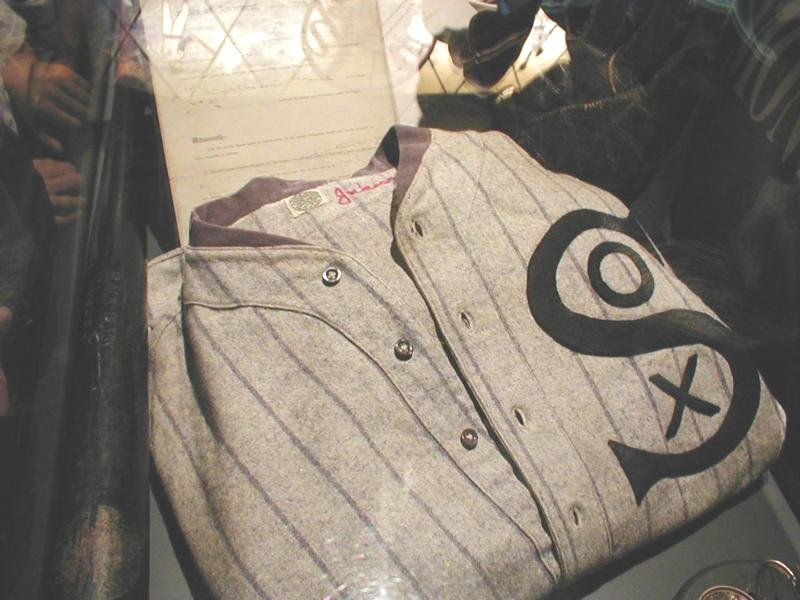 If there wasn't enough arrogance surrounding the New York Yankees, this just adds another reason why I detest them so much. Mayor Michael Bloomberg is actually planning their World Series victory parade, and they still haven't made it to the ALCS yet.

Listen, I know it's not something you can slap together overnight, but you should at least keep it quiet and not make it public this early.

Ugh. I really hope he's putting the whammy on them.

The Baseball Hall of Fame has also confirmed that the Joe Jackson jersey (pictured) they have is a fake, and now other items that were donated by the late Barry Halper's collection are under scrutiny, like the bat called "Black Betsy", a glove and a gold pocket watch. Here's more from Pete Nash's blog, Hauls of Shame.

And a happy 70th birthday to John Lennon today. Can it really be almost three decades since he left us?
Posted by The Omnipotent Q at 12:05 PM

Q, I agree with you on Mayor Mike, but don't tar that native Bostonian's dopey comments with the rest of us Yankee fans. He's about as much a Yankee fan as Martha Coakley was an expert on Curt Schilling!

Interesting comment, Lisa. On Facebook, I noticed many Yankee fans like yourself were upset by Bloomberg's comments. You clearly haven't forgotten the events of six years ago...

That's right. Most Yankee fans haven't forgotten. Because since we're real fans, it's seared into our memory. Unlike faux fan Mayor Bloomberg, who I doubt could name more than two Yankees without a Teleprompter to help him!

It always makes me laugh, Lisa, when I see politicians make fools of themselves when it comes to sports teams. Examples: Hillary Clinton and "long time" love of the NYY, Rudy Guiliani giving a key to the city to Hideki Irabu, and John Kerry talking on ESPN about "Manny Ortez."

And I want to barf when I see them make idiotic bets among themselves.

John, good morning. Did you hear that Tony Gwynn has just been diagnosed with cancer? It's maybe related to chewing tobacco. I just found out before the Sunday sun has risen. I wish him well...one of the best hitters (and person) in baseball ever.

I heard that yesterday afternoon, Peter. I wish one of baseball's classiest guys all the best.